Now the win-counter between Italy and Georgia in European competitions for club is 5-3. It was five nihil few months ago...

Tsiklauri is by far the best scorer of the tournament, but probably he will have no more matches to play
Top

Calvisano confirms that in case of tied points the distinction would be the points difference (now Locomotive +40, Calvisano +19), therefore Calvisano need a bonus point win in Rome.
So Locomotive has still some decent chances to qualify to the final
https://blog.rugby.it
Top

Canalina wrote:Calvisano confirms that in case of tied points the distinction would be the points difference (now Locomotive +40, Calvisano +19), therefore Calvisano need a bonus point win in Rome.
So Locomotive has still some decent chances to qualify to the final

Meanwhile, 8 weeks ban to Casellato (Rovigo, coach) and to Acosta (Petrarca, prop)
The first one shouted a racial offense to Petrarca's kiwi flyhalf Su'a, the second one spat in the face of a Rovigo's player during the end of the match corridor. Petrarca v Rovigo derbies are never quiet...
https://blog.rugby.it
Top

Results and scorers from FIR 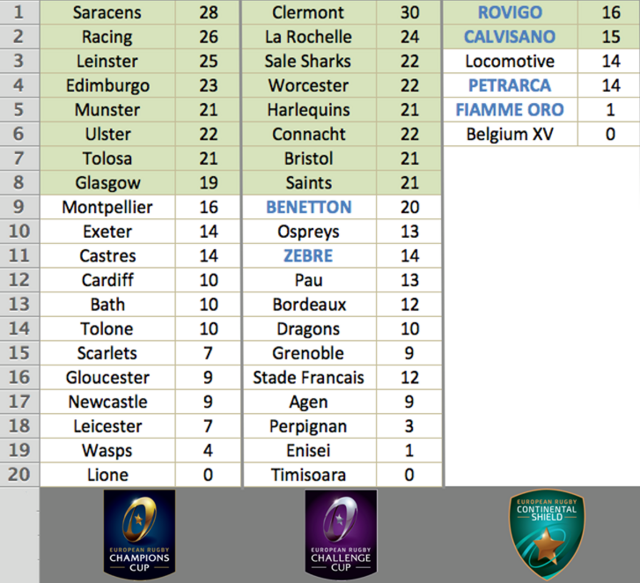 1) Timisoara and Enisei, which last year defeated the Italians in Continental Shield, in this edition were submerged under avalanches of points in Challenge Cup. Which fate awaits Calvisano or Rovigo next year?

2) Are you therefore considering different solutions compared to a single participation of a single club?

"The theme is on the table. We are available to discuss and collaborate for a solution that can find a wider solution"

"The details to be defined are many, both formal and economic. We will have to be able to transform this opportunity into something useful for the movement and not just a sum of defeats with unrealistic scores"
https://blog.rugby.it
Top

Are they saying that union run sides may be the way forward for the 3rd tier of club rugby in Europe?

This would work for Romania, Georgia and a few others in my opinion
Top

Although was a good thing to encourage the clubs, the truth is none of them at this moment can sustain same level of preparation over winter when the fields are frozen or covered in snow. This is possible only with a under field heating system. The only type of system for rugby available any time will be when the works of new Arcul de Triumf Stadium will finish. There is also Cluj alternative but costly to use it.

Wolves never got that scores and occasionally won a match or two because they were the whole time in preparation for matches and not in vacation. With the financial problems of Timisoara, there was no proper preparation these last two months.

However, the good news if the club won't declare bankruptcy and found the money to continue to play in Super Liga and also keep most of its players.
Top

They're talking just about italian situation.
Enisei dominated italian clubs in the past editions of the Shield, and the Shield is played as well in the Russian off-season. So you can't expect great things by our club (Rovigo or Calvisano) next year. In this very moment I think there's no one italian club up to a real challenge in Challenge Cup; I'm pretty sure that Rovigo or Calvisano are going to lose all the games and with no little gaps. Top12 (=italian championship) level is more or less the same of french ProD2, if not high Fed1.
So it's natural to start thinking to some other option. An Italian Select would be somehow nice, but it would have pro and contra and I don't know if EPCR would admit it
https://blog.rugby.it
Top

The biggest problem now for those clubs is the Premiership possible expansion. This would mean more English spots and less T2/Italian spots in the Challenge Cup
Brazilian Rugby News: www.portaldorugby.com.br
Top

Is the Belgian XV this year a sign they may be more open to league amalgamations or Union run sides. I think the Wolves was very successful at the time and has a better chance of success.

I don't know how much Pro14 can influence things but union run/league amalgamations in the challenge and continental shield would be a perfect way to test admission of these nations to pro 14.

I wonder if Enisei and Timisoara are going to show a 100% effort in their play-off. Are they still willing to stay in Challenge Cup, despite six neat losses and little home crowds?
It's not a malicious question, I really can't imagine if they could want (maybe unconsciously) to quit the tournament at least for a season
https://blog.rugby.it
Top

Tiernster wrote:Is the Belgian XV this year a sign they may be more open to league amalgamations or Union run sides. I think the Wolves was very successful at the time and has a better chance of success.

I don't know how much Pro14 can influence things but union run/league amalgamations in the challenge and continental shield would be a perfect way to test admission of these nations to pro 14.

Tiernster wrote:I feel like Irish AIl champions should be competing in continental shield as things stand

I agree on semi-national-team-sides. The qualifier Heidelberger RK where also such a setup (they were disallowed to take part in the Challenge Cup, due to their sponsor owning Stade Francais).

I heavily disagree on the Irish All champions taking part. While standardwise this is maybe even not a bad idea, it devalues and diminishes the competition totally. The Italians playing in it, is already a stretch.

Ireland could help a lot if they focus on letting there youth play continental European teams and keep on doing so, even when they lose. That would be a big help.

Tiernster wrote:Also I thought Italian clubs would need to playoff against Timisoara and Enisei to get into challenge cup

They play-off against each other. The winner plays one of the two Italians in the Shield final. Both finalist are in the Challenge Cup 2019/2020. So yes, we already know, that one Italian team will play in the Challenge Cup next season
How to grow rugby worldwide?
Look at the world ranking in July. Teams ranked 1-10 have to play one team from 11-20 (they don't play in a regular competition) away the next year. 11-20 play 21-30 away and so on. Yes, it really is that simple.
Top

Isn't the whole point of the Italian Top12 clubs in the Continental Shield a way to allow historical powers like Rovigo and Petrarca to play in Europe? They aren't represented by Benetton Treviso in the PRO14 (they are rivals) and that left a need of giving them an alternative. I've heard that from an Italian friend too.

I think first of all we need to know if the Premiership will have 13 clubs. If so, there'll be only 1 place left for the rest.
Brazilian Rugby News: www.portaldorugby.com.br
Top

The winner plays one of the two Italians in the Shield final.

Not this year -- according to EPCR: for logistical reasons

Users browsing this forum: No registered users and 12 guests