what happened to Russia?

Yeah, considering how frequently he changes team I start supposing that he's not such a great coach
Top 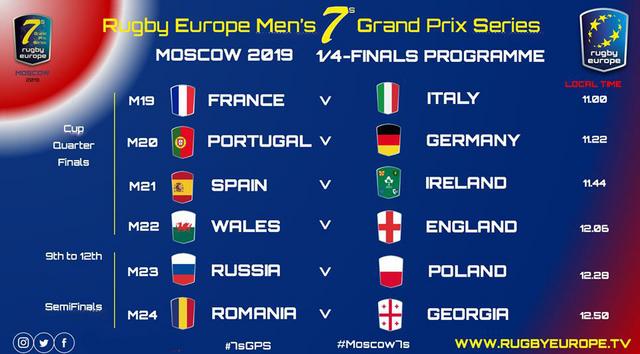 WHO qualifies from TROPHY?
Which are ONE and TWO?

Rugby Europe again made errors with the scores on their website. Last week, I checked the videos just for fun, and I found 3 errors in the scores (the scores are still wrong on the website), this week - they have Wales 29-24 Italy instead of Wales 29-14 Italy in the first video I checked. I'm sure there will be more errors if I check...

For England v Germany, it looked like Germany missed the conversion at the end, but it was given. Can anyone else confirm if they think the conversion was good?

Hence, play-off charts might be wrong and the whole outcome -- illegitimate
as this team should be be paired with that and so on ...
Top

Even for RE, this weekend's stats were a complete FU. Why not just pull numbers from a hat?
Top

Can anyone confirm if Germany scored this conversion against England?

It was added to the score, and the flag seemed to signal it was successful, but it seemed to me that it did not go over (but went wide) - though I could be wrong.
http://theroonba.com Results, fixtures, rankings
Top

Portugal did also complain a lot in their game against Spain about the clock at the stadium. It seems it kept running for half a minute in spite of the ref having asked to stop it.
Top

In the Portugal-Spain match, apparently Portugal made it 10-14 and elected not to try for the conversion, but save time and go for another try to win the game.

However, when I was watching the match live, this did not make sense, as the scoreboard read 12-14, and I couldn't understand why Portugal would not go for the conversion to tie the score.

In the Zenica 7s, Lithuania 36-7 Luxembourg was given as the final score by Rugby Europe - but there were 2 different scores on screen at the end (38-7 at top left and 31-7 along the bottom) and you could hear people in the background trying to work out the score.

Another annoying feature is that sometimes, the camera pans away from the conversion attempt, and so it's not possible to verify whether the conversion was scored or missed. Rugby Europe has previously given points for missed conversions, and not given points for scored conversions on their results pages, so it is actually almost essential to check every video to see if they have counted up correctly.
http://theroonba.com Results, fixtures, rankings
Top

A little complaint also by my side: yesterday Rugby Europe published 86 images from the Moscow tournament and no one of them depicts an italian player
http://www.facebook.com/pg/rugbyeurope/ ... tn__=-UC-R

About Wales-Italy 29-24 (real result 29-14), I can confirm that it was the only wrong score concerning Italy.
"Shamefully", the wrong score was reported also by our Federation; evidently they haven't watched the games
http://www.federugby.it/index.php?optio ... temid=1030

There was also this misunderstanding: minute 15.13 of the video below, Zini from Italy kicks a conversion and the kick seems perfectly good but the sideline referee doesn't rise the flag, italian players protest, the referee goes to talk with his assistant and finally he confirms that the conversion was good. Italian vice-coach makes a gesture like saying "raise that damned flag, don't just say at the radio that it was good!".
Maybe after having refereed a dozen of games in two days these referees/commissioners lose a bit of concentration
https://www.dailymotion.com/video/x7bqgyg
Top

It seems RE are not that bad and sluggish

They have done all necessary calculations in good stead
https://www.rugbyeurope.eu/lithuania-jo ... vens-rugby

In addition, LTH got promoted to GPS for 2020

I suggest even removing goal posts and PAINTING in-goals BLACK [not agree, dropkicks during the play could still be useful and nice to see],
introducing start-stop clock [I'd say no: seven minutes per half with start/stop clock could be very long and it could make impossible to prepare precise schedules], shortening and narrowing pitch [I'd say no: sometime some tries appear also to me too easy in such a large field, but good teams are able to defend all the wideness of the field],
removing scrums and line-outs [don't know: they are counter-spectacular, I admit, but they are a link with the "real" rugby], making try SINGLE point [not agree for the reason above: I'd save the chance to kick to the posts during the play]
and introducing RL tackle law in ORIGINAL form, ie 4th = LAST [mmm... not agree I'd say]

I posted those suggestions ... TONGUE in CHEEK, to amuse FOLKS
Top

I wondered if that was so, but wasn't sure. I was going to suggest switching to a round ball and getting rid of the offside line.
Top

Will England play as England or as GB in Colomiers?
Brazilian Rugby News: www.portaldorugby.com.br
Top

Response from Rugby Europe when I pointed out they had scores that were demonstrably wrong (after reviewing videos of the matches).

"The official scores are those on the gamesheets, validated on-site, and signed by team managers."

So it seems managers are signing the gamesheet, assuming that the score is correct rather than checking. Not sure what the "validation" process is.

What we have is incorrect results becoming official because they have not been checked properly...
http://theroonba.com Results, fixtures, rankings
Top

Belgium got absolutely robbed during this 2nd leg of the trophy and again I am amazed by rugby Europe’s amateurism.

First, the touchline referees for the semifinal against Lithuania were an absolute disgrace. They did not even bother to run next to the touchline to see if a player actually had his feet in touch for a try (which could be the case on Lithuania’s 3rd try) or intervening to help the main referee on offside and kick offs. In the last minute of the game where Belgium was 5 meter away from Lithuania’s try line and trailed by 6 points, Lithuanian players were conceding faults on purpose to slow the game and were subsequently offside (no card was given for the succession of faults in front of Lituania's try line). Finally, not helped by its touch judges, the referee blew the final whistle of the game on an imaginary penalty stating that the Belgian player was held on the ground and got back up while the player was ankle tapped and was at least a meter away from the tackler.

Second, in the competition manual given by rugby Europe to the different managers of the teams involved in the GPS, trophy or conference. It is nowhere stated that in case of equality at the end of the two tournaments, goal average would be used to decide which team will be promoted or qualified for the Olympic repechage in Colomiers. Why would it be decided by Goal average and where is that written? Why should not it be decided by the number of victories? Belgium lost only one game (the semi final against Lithuania) during both legs of the trophy while Lithuania lost 2 (against Belgium and Czech republic) and Ukraine lost 3 (Belgium, Lithuania and Israel). Belgium got aware of that rule after their semifinal loss against Lithuania and had to win the third place playoff by at least 50 points in order to finish 1st.

Third, I suspect that Lithuania lost on purpose their pool game against Czech republic in order to play Belgium in the semifinal of the second leg of the trophy so that they could prevent Belgium to reach the final and get 18 points. This is in my opinion against the integrity of the game and the Olympic values and should not be allowed. If you have had the chance to watch the game against Czech Republic, it is an absolute joke. Lithuania is losing by 10 points on the scoreboard and one of their player wait like 20 seconds in the goal area before scoring like if they were winning by 15. One of the player got tackled into touch while he was in the in goal and had all the time to score. The last play of the game was a joke as well were you can see Lithuanian players walking with the ball in hand and take so much time while awarded with a penalty, kick to touch for a lineout in Czech Republic 22. The Lithuanian player then lobes the jumper by 10 meters to lose the possession of the ball and lose the game 17-21.

Finally, the pitch on which the game was played was dangerous for the players. There were holes all across the pitch from athletes practicing shot puts on the pitch the day before.
Really though pill to swallow for the belgium players that prepared well for those 2 tournaments and that see their return to top European level postponed due to rugby Europe amateurism.

FLIDTA RISXVA wrote:It seems RE are not that bad and sluggish

They have done all necessary calculations in good stead
https://www.rugbyeurope.eu/lithuania-jo ... vens-rugby

In addition, LTH got promoted to GPS for 2020

Users browsing this forum: No registered users and 12 guests