Those who wish can listen.

MEPs call on the Russian authorities to immediately repeal the country’s law on ‘foreign agents’ and to bring existing legislation into line with Russia’s constitution and obligations under international law. This law from 2012 requires the country’s non-governmental organisations to register with the Ministry of Justice as ‘organisations performing the functions of foreign agents’ if they receive foreign funding or are engaged in vaguely described ‘political activities’.

The resolution also condemns the recently approved amendments to the ‘foreign agents’ law’, which considerably widen its scope and will allow for individuals to be discredited or labelled as ‘foreign agents’. This measure is often used against civil society representatives, members of the political opposition or independent journalists.

The law also imposes specific requirements to register, label and do accounting for publications, and makes non-compliance a criminal offence, including the possibility of sanctions with heavy administrative fines or imprisonment of up to two years.

The text was approved by show of hands. The full resolution

1. Calls on the Russian authorities to immediately repeal the law on ‘foreign agents’ and to bring the existing legislation into line with Russia’s constitution and its obligations under international law; urges the Russian Federation to stop deliberately creating an atmosphere that is hostile to civil society and therefore condemns the use of the law on ‘foreign agents’ as a means to harass and suppress civil society organisations which cooperate with international donors or express political opinions;................

In Russia no one wants to protect interests of West for free.

There fore our whores are usually financed from abrod. This law forces them to pay taxes and inform public that they are "foreign agents."

Аctivity of whores is not prohibited.

If whore does not report receipt of money, then he will be punished with a fine.

In United States oreign Agents Registration Act (FARA) is much stricter than in Russia.

Marina Butina already knows about this.

If in Europe there are no such laws then this means that your are a US occupied territory. And your are forbidden to resist influence of others.

More precisely in Europe there are similar laws, but they apply only against RT and Sputnik ...

Any information (except for whores from Russia) from Russia is declared propaganda.
My opinion is propaganda too, so it can be banned.
Aproximately this line of reasoning.
Fact that in Russia there is a direct financing of whores is a positive democratic influence ...

Everyone can do anything. Anyone can become anyone, we have a democracy. You can fall as deep as you like.

You just need to choose.

Fact that Europe is an occupied territory is not terrible. This is also a form of interstate relations. Countries may not spend money on weapons and army, but spend money on social benefits. Master will protect them.

Chinese troops on the border of EU and US! Its cool !

But our psychology is different. We will live worse, but we will be masters in our land. We will not let anyone into our land.

But Europes refusal to defend itself is not worst.

There is no world economic power without ability to protect with help of itself. Otherwise its just Thanksgiving turkey. Therefore political claims of Europe are ridiculous and based on nothing. In Western civilization there is only one world power - USA.

Worst thing is that Western civilization has ceased to be engine of world progress. All these sanctions against buyers of Russian weapons or Chinese high technology are a loss in economic competition.
Economic sanctions to eliminate a competitor are an attempt to stop progress. Of course this is better than world war.

Fact that West has stopped coming up with new technologies is not a problem, problem is that old technologies are beginning to forget.
Europes rejection of nuclear energy. This is a loss in future of this technology.
Do you know what American Atlas V rockets fly on? On Russian engines. Starliner launched into orbit also with help of Russian engine.

Why make an engine yourself if you can print a dollar? After global economic crisis US will remain with dollar and Russia with the worlds best rocket engine.

Now there is an attempt to save Starliner. Inside it are 7 people. They do not have spacesuits, if depressurzation occurs they will die.

After 1971 in USSR and Russia all flights of astronauts take place in spacesuits.

Ten people who mattered in science in 2019.

Starliner has landed normally. Next time he will fly with people.

All a Merry Christmas.

Putin’s Russia, Punching Above Its Weight, Keeps Adversaries Off Balance

Its economy is sputtering and its young people are frustrated, but with America and Europe in tumult, Russia and its leader of two decades are on a roll.

But i was surprised by most popular reader comments.

Your question: How has a country like Russia, huge in size — it has 11 time zones — but puny when measured by economic and other important metrics, become such a potent force?

The answer: By installing a Russian asset in the Oval Office.
It's not all that complicated.

Putin's Russia only looks good because the United States, through incompetence, timidity and corruption play the game at Putin's level. The key to defeating Putin lies not in Moscow, but in Washington DC. Remove the autocrats from our nation's capital, invest in science and learning, spread freedom and the post-Soviet Union will come crumbling down again like the house of cards it is.

Remember this in eleven months when its time to vote the republicans out.

"“How is it that such a rotten system punched so far above its weight?”"

Nina Khrushcheva's quote permeates this entire article. Putin seems to have grasped that what gives a nation power isn't so much measured by its economy or military, but its power to mess with the very concept of reality.

Like so many Americans, it simply amazes me (freaks me out, actually) that Putinesque ideology has gained such a strong foothold in the Republican party--the very people who viewed Russia as implacable foe. Led by Donald Trump, who has some mysterious connection to Putin reporters can't nail down, the GOP is parroting Russian propaganda with the abandon of groupies at a rock concert.

It's insidious, vexing, and downright terrifying. When Nina's grandpa declared "we will bury you," America scoffed at the threat. How ironic that that threat is coming through because the "battles" are fought through media maniupulation and mind games, not nuclear weapons.

In the US do not fear Civil War?

Nina Khrushcheva is a well-known lying bitch but article mentions another authority from among migrant whores Petr Pomerantsev with book "Nothing Is True and Everything Is Possible".

Putin has now fully established control over the media. A vast majority of Russians still get most of their information from television, and the three major channels are either owned directly by the Kremlin or by state-owned companies. Each week, a Kremlin official directs their coverage. Major newspapers have been cowed.

How should a tyrant Putin act to deprive Russian population of information and impose its propaganda?


Right ! To increase number of Inet users to 76% of population and make cost of Inet one of cheapest in world! 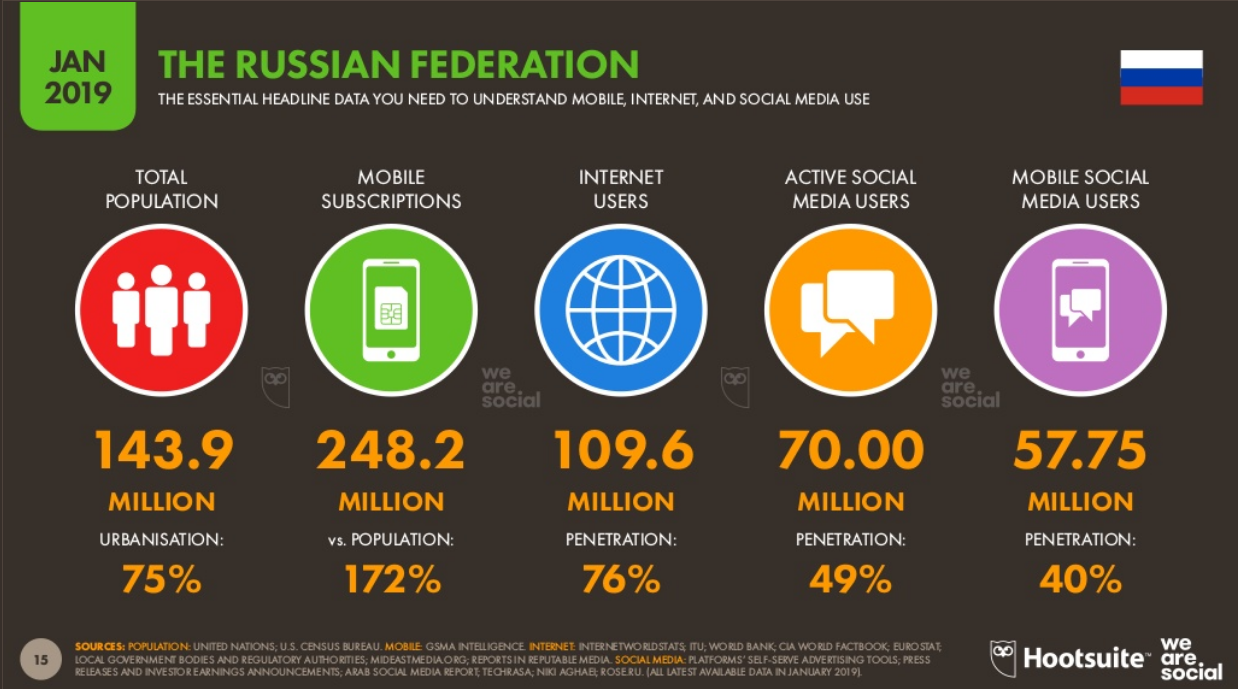 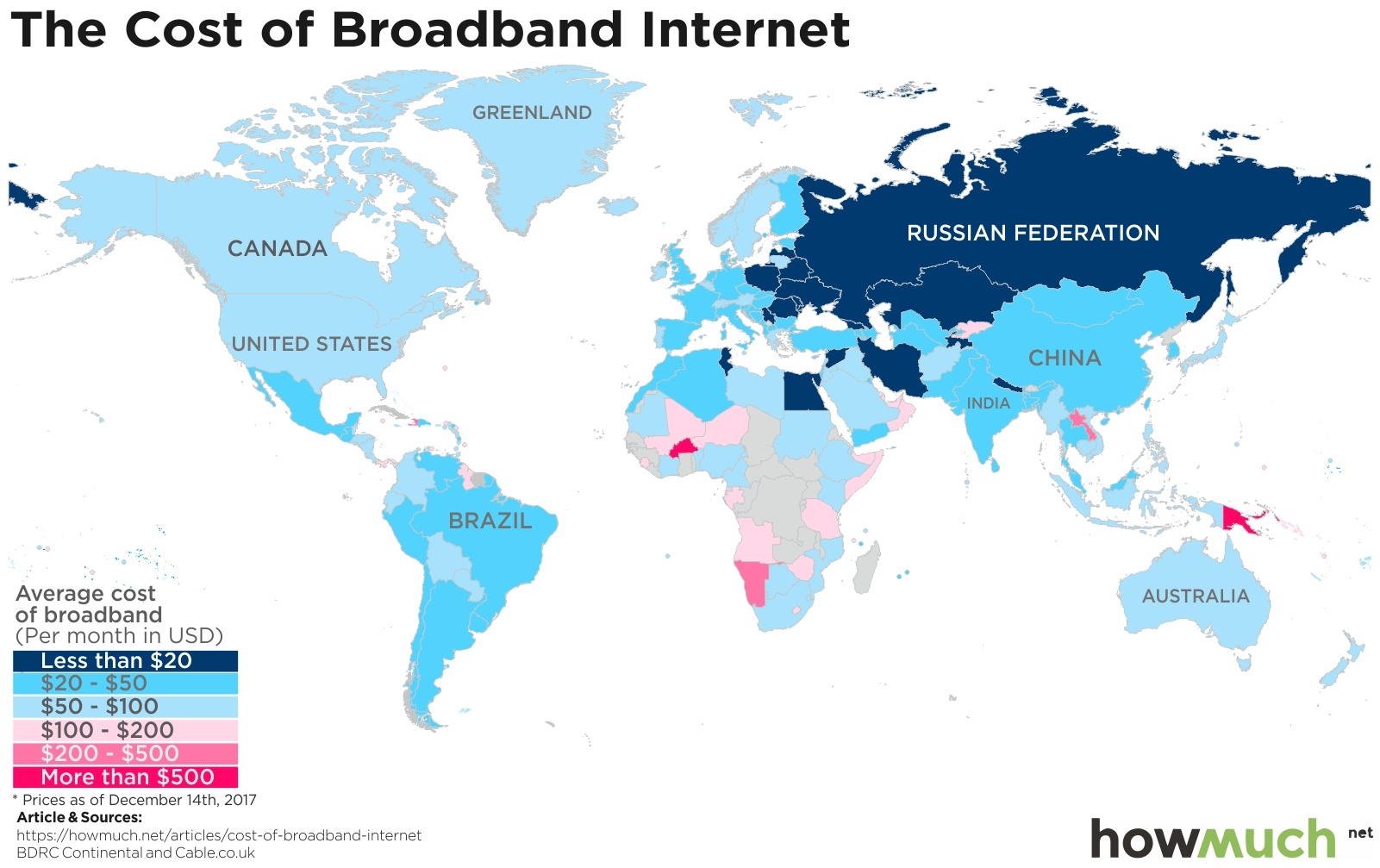