Fortunately wind carries smoke to capital of these idiots which is south. 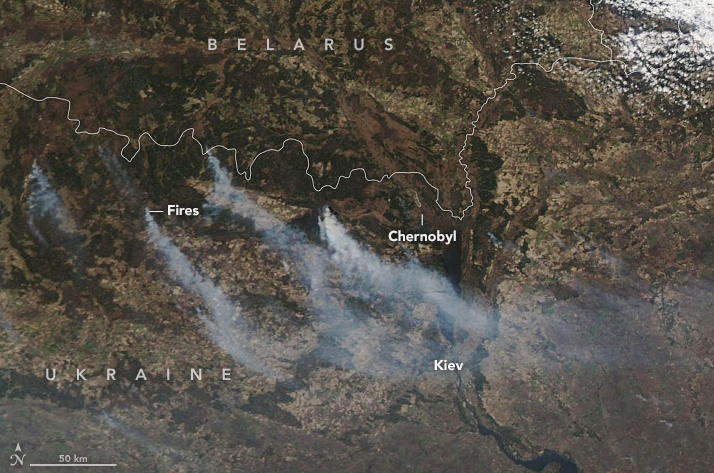 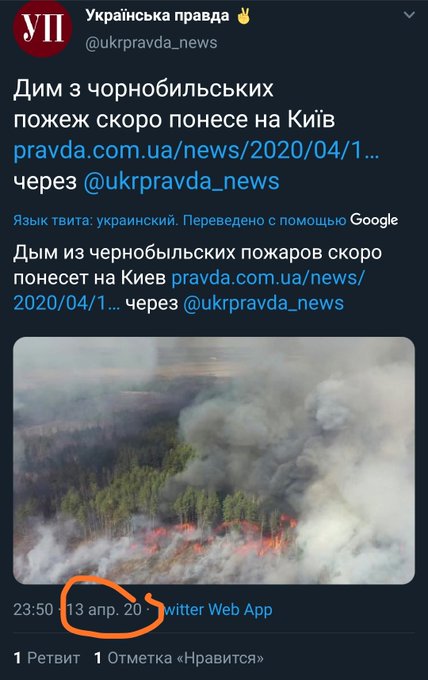 Michelle Chiappelli Zvyagin a day ago

I am an American living in Moscow. My husband is a Russian Hockey player -now coach-for 42 years. We are ultra conservative Christians. We belong to a Protestant church here led by well known American missionaries.
It would be considered a mega church with several thousand members every week. I have been married for 25 years. Of those 25 years I have lived in Russia for 13 of them. Because of hockey we choose to live in Russia but we LOVE LOVE LOVE America with all our hearts.
That being said- I will be very clear in my statement.
Russians fully support Putin!
Nobody here doubts his objective which is to protect Russia. At all cost!
People here put their nation first. Unlike the democratic vultures in the USA.
As for Corona virus- we have been quarantined in Moscow for several weeks-despite what the news reports.
No one over 65 is allowed to leave home- for 3 weeks already!
In our mega church and hockey community (which spans the globe) we know ZERO people infected and suffering here in Russia.
One coach we know who traveled from Russia through Europe AND New York a month ago to go home to Canada got sick but did not die. Not even close.
But no one here in Moscow that we know is sick.
Of course it is getting more serious this past week but to criticize the government’s response is ridiculous.
There was no hysteria before last week. No masses of people dropping dead. No reason to spread fake propaganda to the nation to slant the hearts of people who don’t do their research. They trust Putin.
Don’t believe everything you read or watch on the news.
They are feeding you lies for breakfast lunch and dinner.
By the way- President Trump is a hero.
A good friend of our Pastor is Trumps top Christian advisor. A very respected man. James Robison.
He said in a recent interview that President Trump is praying more than you could ever know and his heart is open to here the Lord for wisdom and guidance. He said he is the most teachable President he ever prayed with.
Do not be fooled! This President is humble before God.
It is true no matter what the Antichrist media and government vomits up.

Yes, there was such a player Sergey Zvyagin but he was not famous.

Edward Snowden who received asylum in Russia asks Russian authorities to extend his residence permit for another three years,

I like to read Russian language forums in US. I interested in reading. There Jews are mainly from former USSR, but there are others, including emigrants from Russia.
All discusions about destruction of business, unemployment increased, economic situation worsned and so on.
I have not read a single text about deaths of tens of thousands of people.
But in Russia opposite is true. Almost all texts on how to save people and then about economy ...

Julian Assange has published all data!

Please Tell the Establishment That U.S. Hegemony is Over

Two tragic accidents I am sure others will learn from.

I do not know what happened but it is possible that this is suicеde due to overwork at work. Doctors work seven days a week. But its touching that country where day dies as much as in Russia for entir time of epidemic monitors situation.

I think that any resident of Russia will send this shit to a knockout at a meeting. I would personally do it without hestation ...

What surprises me at all is not what West writes about Russia but number of people who believe this.
I read comments and shocked ...

US saw 15,000 'excess deaths' in the early weeks of the coronavirus pandemic suggesting many more died of COVID-19 than were officially counted, report finds

Russia will become increasingly dependent on China. A “vassal” as Macron warned.

The Kremlin and Russian elites pin their hopes on the proposition that China will roll out massive measures to support its tumbling economy and prevent growing unemployment from causing social unrest and will continue government-driven spending on construction and infrastructure, including accelerating rollout of 5G networks, giant data centers, and more. Following cuts envisaged by the OPEC deal, Russia will have to decrease shipments of oil to Europe while continuing to supply oil to China in order to meet the obligations of Rosneft, the largest state-owned oil company in the country, under its multiple long-term contracts with Chinese energy companies. With these two developments in sight, China’s current position as the dominant trade partner for Russia and Central Asia will be reinforced. The first-quarter data published by Chinese Customs supports this trend. As China’s trade volume with the outside world has plunged by 8.4 percent, trade with Russia has grown by 3.4 percent to $25.4 billion. Trade with Kazakhstan, its other important source of oil, has jumped by 17.8 percent.

Secondly, there is huge appetite among insecure leaders across Eurasia to emulate China’s model of societal control and surveillance. Chinese companies including Hikvision and Huawei have been aggressively pushing their products to authoritarian leaders in the region long before the pandemic. Moscow’s city government was an early adopter of this technology, relying on Chinese vendors like Hikvision. In Central Asia, Huawei and other Chinese companies have been building similar systems throughout the last decade. For the Kremlin, the pandemic has been the best possible justification for the rapid embrace of Chinese-style monitoring systems, such as the surveillance cameras equipped with facial recognition technology that are starting to appear on city streets. Now it is increasingly likely that other Russian cities will roll out similar systems, and the Kremlin will no doubt turn to China for technical assistance.

The growing importance of telework for the Russian economy means that the Kremlin will also accelerate its plans to upgrade Russia’s digital infrastructure, including the rollout of 5G. Given the Russian security services’ deep mistrust of Western tech companies, Huawei and ZTE will remain the overwhelming front-runners in the race to supply key hardware for the Russian 5G market. Russia’s willingness and ability to hedge its bets via trial projects with Nokia and Ericsson are now more doubtful. Thanks to pressure on the Russian state budget, Chinese vendors, which can provide cutting-edge technology at lower prices than European companies, will have clear advantage.

Before the pandemic, French President Emmanuel Macron had been trying to convince the Kremlin not to put all of its eggs in China’s basket and has publicly called for improvement of Europe’s relationship with Russia in order to prevent the emergence of a Sino-Russian axis dominated by Beijing. According to Macron’s interview with the Economist, Putin should be provided with options by the West in order not to turn him into “China’s vassal.”

Such arguments are now going to be a lot harder to make, especially as Europe finds itself mired in a painful recession. If anything, Beijing is set to boost its role across Eurasia as the major driver of economic growth, the provider of critical technologies, and the enabler of establishing new forms of political control for regimes that are feeling a whole lot wobblier. Ironically, the virus outbreak may bring China one step closer to the establishment of a Pax Sinica, a Beijing-centered regional order that covers large swaths of the Eurasian landmass.

I just surprised at Western immediacy. First surround us with military bases, then announce sanctions and then try to send us to war with China.

Аuthor of this text is a currency whore from Moscow from center of Carnegie. He is paid dollars for his views.

Transfer it to my topic. It is interesting but not related to virus. For several millennia Europeans killed each other and stopped doing this only after occupation of US and USSR. Less than 100 years without war. USSR has left, what will happen when US leaves? Europe is 0 without its own policies and armed forces. Occupied territory.
In any case Russia will never become a vassal of US or China. China is too smart to demand this and US is too weak to force us.

They have you by the throat already. The combination of the virus/recession and collapse of oil prices (which your entire economy is dependent on) just tightens the grip.

If this trend continues, China is set to fortify its position as Russia’s main export destination, which will give Beijing leverage. As Russia slips deeper into recession, this leverage can be used and converted into ownership of assets: tactics we’ve seen elsewhere

Since 80 s Europe has become only buyer of our gas, and oil even earlier. Have we become their vassals? In addition Russia at low prices for raw materials looks much better than many countries. Whole world will plunge into recession and China is no exception.

Well, what is China's vassal? It’s ridiculous. Over the past decades, the Russian economy has been operating in a stressful sanctioned and bloodless regime. Unlike Chinese, American and European, it is extremely little monetized. 2.5-3 times less. Everything goes to the point that after this crisis Russia will be at least in the top 3 largest economies in the world. Due to the increase in monetization and its resources.
As for oil. Then there’s a war going on for a share of the future oil market between Russia, the United States and Saudi Arabia. In this war, ours have already said that they are ready for 5-6 years to keep prices low. This means the collapse of US shale oil and the collapse of the state of Saudi Arabia. Let me remind you that the budget of Arabia is calculated from the oil price of $ 80. And they have enough reserves for a maximum of a couple of years.
Top

He simply does not understand the difference between oil and gas trade through pipelines, where contracts are concluded at 20-30 years. And the oil and gas trade by sea, where there are short contracts. Russia sells 90% under long-term pipeline contracts. How will China or Europe influence signed contracts? No way.
Top

This is probably a step towards Russia!

STMKY wrote:He simply does not understand the difference between oil and gas trade through pipelines, where contracts are concluded at 20-30 years. And the oil and gas trade by sea, where there are short contracts. Russia sells 90% under long-term pipeline contracts. How will China or Europe influence signed contracts? No way.

China are going to own your pipelines soon when you can’t repay their loans.

I think the vast majority of Australians would prefer to do less business with China.
Top