Do you really understand how the trillion-dollar lawsuit of the USA against China over the coronovirus will end? I will tell you. China has US $ 3 trillion in US green toilet paper debt. An American court finds China guilty. They confiscate the 3 trillion. Farther? The collapse of the dollar. What are the fools who then buy dollars. The end of Pax Americana.
Top

Russian President Vladimir Putin has a well-earned reputation as an astute tactician and a steely decision-maker. Yet over the past few weeks he has mismanaged Russia’s responses to two major crises: the collapse of the oil market and the coronavirus pandemic. Now he is facing one of the most acute challenges to his rule right at the moment when he had thought it safe to extend his term through a constitutional referendum.

The Kremlin’s first mistake came in early March, when it reacted to falling oil prices by rejecting Saudi entreaties to cut production. The Russian decision to push for an oil glut proved to be singularly mistimed.

Putin had likely hoped that a sudden drop in prices would bankrupt the many independent U.S. shale producers who operate on thin margins. And since the Russian budget balances at around $40 per barrel, while Saudi Arabia targets a price that is roughly twice that, the Kremlin no doubt figured it could stick it to the Saudis while absorbing a short-term fall in revenue.

What Putin planned as a knockout punch turned out to be more of an own goal. While the U.S. shale industry has indeed taken a hit, a recent round of consolidation has made it more adaptable than it might have been otherwise. By April, when the bottom had fallen out of the oil market and negative prices were being posted, it was President Trump who threw Putin a lifeline by brokering an agreement to cut production with the Saudis. Many in the Russian energy sector saw this as a humiliating climbdown.

Yet it’s not just Russia’s reputation as a market player that’s at stake. Oil prices are an existential issue for Putin’s petro-state, where budget and currency are closely tied to global hydrocarbon markets. Russia’s economic forecast appears correspondingly bleak. Though the Kremlin currently sits on a foreign currency reserve of about $430 billion, budgetary support for struggling businesses in the months ahead could blow through that cushion rather quickly. Worse still, the government could continue to mandate paid leave for workers in the midst of the coronavirus pandemic without providing the necessary financial support to struggling companies, forcing many to resort to dubious tactics to force workers off their payrolls or drastically reduce wages. This could easily result in a nationwide surge in unemployment and a wave of bankruptcies.

The Kremlin’s second big mistake was to allow its propaganda machine to project an aura of invincibility even as the covid-19 tsunami was spreading across Russia. The Kremlin closed part, but not all, of its 2,600-mile border with China on Jan. 31, leading to a false sense of security that was compounded by willful ignorance. Demonstrating both its hubris and ignorance, the military thus went forward with a large-scale exercise on Ukraine’s border in late March, long after NATO had pulled the plug on its “Defender Europe” drill.

Testing throughout February and most of March was handled by a single lab in Siberia, meaning that most covid-19 cases across Russia’s 11 time zones were being wrongly classified as pneumonia, bronchitis, flu, etc. It didn’t help that authorities criminalized the spread of “false information” or that they arrested a prominent doctor for challenging official statistics as she tried to deliver masks to an impoverished rural hospital.

Now, as social media users are sharing videos of ambulances lined up for miles waiting to deposit patients in overcrowded Moscow hospitals, it’s no longer possible to claim that all is under control. The Russian health-care system was already struggling with a number of chronic health conditions (tuberculosis, heart disease, alcoholism, etc.) and many public health experts worry that the pandemic might bring matters to a breaking point. Russia is also one of the rare countries that’s simultaneously coping with low life expectancy and a graying population, making it particularly vulnerable to covid-19. Putin’s tendency to delegate decisions on pandemic policy to regional governors might help insulate him from political fallout in the near term, but it is unlikely to lead to a well-managed policy over the longer term.

All of this jeopardizes Putin’s plan to change the constitution to allow him to serve two more terms as president, allowing him to stay in office until 2036 (when he will turn 84). Although parliament had already rubber-stamped the changes, Putin had also intended to put them to a referendum, originally scheduled for April 22 but now postponed indefinitely.

Even before the pandemic hit, the referendum was a dangerous gamble. In March, a Levada Center poll showed support for the changes at just 48 percent. That number is likely to fall significantly in the coming months. (A poll released this week reveals that citizens’ trust in Putin has fallen to a 14-year low.) On April 20, 500 people in Vladikavkaz violated a local lockdown order to protest against the lack of reliable information on the spread of covid-19, and protests have also taken place in Rostov and smaller cities that do not typically register big opposition demonstrations.

What happens next is hard to predict with any certainty, but one thing is clear: The legitimacy of the Putin regime will be tested as never before.

What happens next is hard to predict with any certainty, but one thing is clear: The legitimacy of the Putin regime will be tested as never before.

What will happen next?Foreign exchange reserves are currently growing , Oil will rise in price towards end of year, epidemic will be defeated, a referendum will be held before end of autumn.

An ordinary Russophobic article has nothing to do with reality. In the West, everyone dreams that instead of Putin there will be Yeltsin 2.0 named Navalny. You idiots, if Putin leaves, then instead of him will be your nightmare. Because the Russian people require Putin to take tougher measures against the West.
Top

Trust deficit: The roots of Russia’s standoff with the West

I thinking how many whores from Russia should move to London so that in films they begin to write Russian names and surnames at least correctly? I dont ask for more! Just this!

However Russians fade into background. Now bad Chinese are in fashion ...

How cute! Here you can find many great scenarios!

As a result, Beijing faces a wave of anti-China sentiment led by the United States in the aftermath of the pandemic and needs to be prepared in a worst-case scenario for armed confrontation between the two global powers, according to people familiar with the report’s content, who declined to be identified given the sensitivity of the matter. 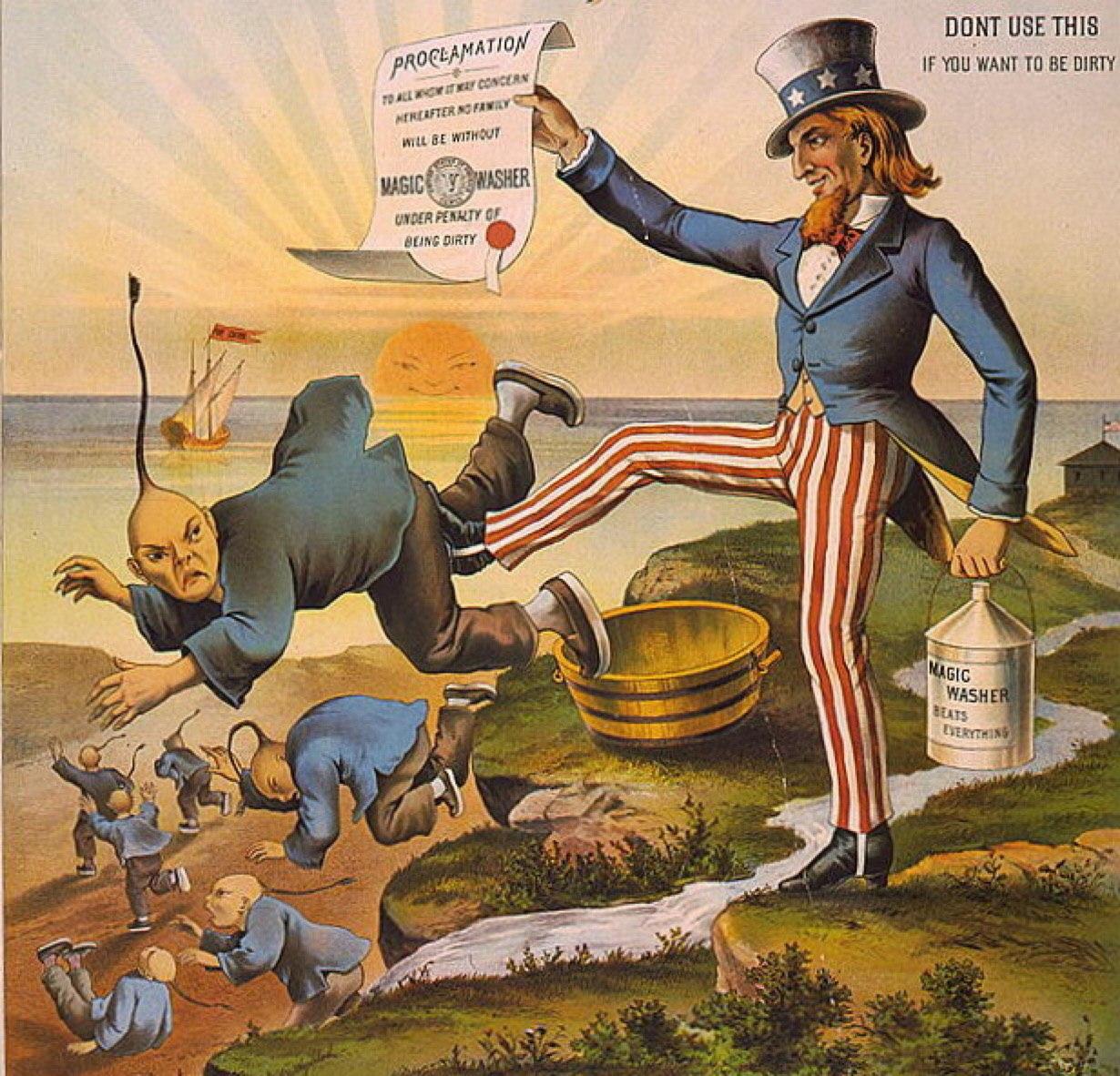 Yesterday I watched the Hollywood movie Elysium. I advise everyone. After a global viral tantrum, you watch these films with different eyes. This is one of the options for the future that these anti-human bastards want to build. I will add that when you watch a movie, keep in mind that they plan to live 200-400 years. In general, Hollywood has show a lot of such futuristic films. In this regard, the Anglo-Saxons are extremely cynical. They do not hide their plans.
Top

Which emerging markets are in most financial peril?

Our ranking of 66 countries shows which are in distress, and which are relatively safe 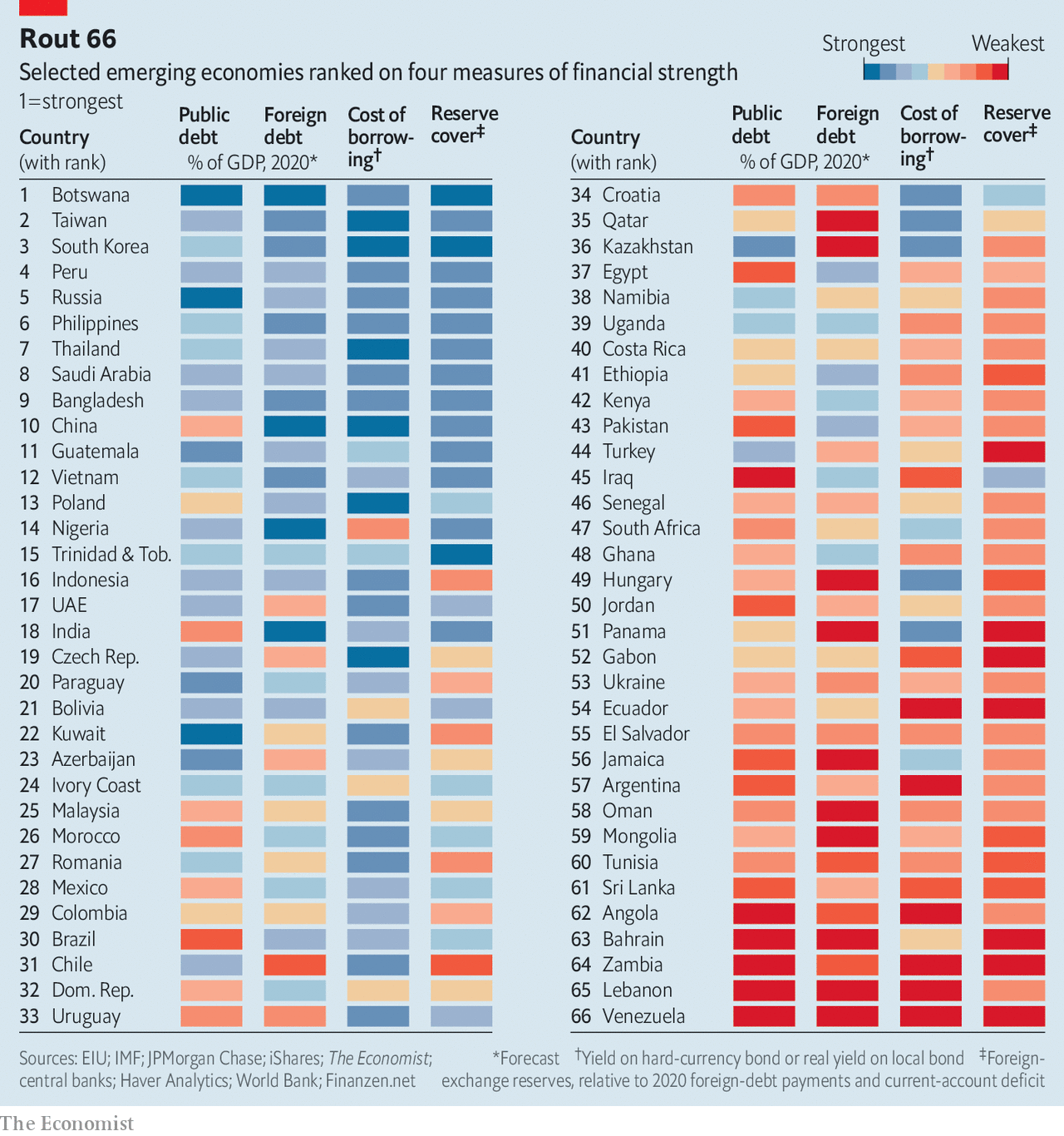 By the way I would like to see leading Western countries in this rating. Probably their place below is closer to Gabon and Panama ...

STMKY wrote:Yesterday I watched the Hollywood movie Elysium. I advise everyone. After a global viral tantrum, you watch these films with different eyes. This is one of the options for the future that these anti-human bastards want to build. I will add that when you watch a movie, keep in mind that they plan to live 200-400 years. In general, Hollywood has show a lot of such futuristic films. In this regard, the Anglo-Saxons are extremely cynical. They do not hide their plans.

Only problem is that, the director and in persona screen writer Neill Blomkamp is not Anglo-Saxon but Afrikaans and this is more a movie against extremist capitalism and their gated communities

. Do better research next time.
How to grow rugby worldwide?
Look at the world ranking in July. Teams ranked 1-10 have to play one team from 11-20 (they don't play in a regular competition) away the next year. 11-20 play 21-30 away and so on. Yes, it really is that simple.
Top

It doesn’t matter at all. You see not that. I am surprised that you did not write about the typical Hollywood happy end. (People captured Ellisium, so everything is not bad as I described. Is not it?)
The essence of the film. 99% of the population lives in poverty, chaos and a concentration camp on Earth. And 1% lives in paradise on Elysium. This is the essence!
Top

Well. Austria officially joined the future Union of GIARussia (Germany|Italy|Austria + Russia). Here is the receipt. Putin, at the request of Kurtz, turned to the Austrian people.
Top

It would be better if you constantly drink ...

Tomorrow is a Great holiday in Russia. Unfortunately there will be no military parade due to fucking virus.
I have one grandfather was a tankman in 1944 was discharged for disability.
Second was a driver in a mortar regiment and died on 4 September 1941. No photos left.

But I don’t drink alcohol at all. Alcohol is a drug. This is a weapon of genocide, which is much more dangerous than tanks and missiles.
Top

Okay, I’ll explain. You know the tradition of the West to attack Russia every 100 years. How does this usually end? The Russians are winning. Come to the den of the enemy. To Warsaw, Paris, Berlin ... At the same time, not only Russia suffers huge losses, but also the West. A more effective plan was invented. For the Russians to kill themselves. Do you know how much alcohol was drunk in Russia before the Trotskyist Khrushchev? Less than 1 liter per year. This is very small. Out of 100 Russians, less than 10% drank alcohol. But from the mid-50s, the soldering of Russia began. In the 90s there was a peak of more than 20 liters per year. The number of Russians since 1989 has decreased by at least 25 million people. Remember our losses in World War 2? 25 million people. now you understand the chip. At the same time, the media and modern culture inspire us that this is an ancient Russian tradition of drinking vodka. An absolute lie. Anglo-Saxons used similar tactics in North America when they destroyed tens of millions of Indians.
Top

On May 8, 1945, America and Great Britain had victory over the Nazis!

"America's spirit will always win. In the end, that's what happens."

Probably in a couple of decades they will also defeat Communists allies of Nazis.

By Huntington’s civilizational standard, Ukraine is a severely cleft country, divided internally along historical, geographic and religious lines, with western Ukraine firmly in the European corner and eastern Ukraine and Crimea firmly in the orbit of Orthodox Russia. Even though it was published years before the 2013 Ukrainian crisis, Huntington’s most famous book, The Clash of Civilizations, is rife with warnings about the dangers of the Ukrainian situation and predicts that Ukraine “could split along its fault line into two separate entities, the eastern of which would merge with Russia. The issue of secession first came up with respect to Crimea.”

Ukraine. Now it is a typical western colony and before that it was most developed republic of USSR. 46 babies born to foreigners were stuck in a Kiev hotel ... Fucking colony.