From ScrumQueens, interesting news about this year's Oceania XV Championship: it will be in november on three dates. Venue are the Fiji, if I have correctly read. Participating teams? They don't specify. The three days of competitions suggest four teams, but they could be also three, or six. I'd say Fiji (moreover if they are hosts), Samoa and PNG, then perhaps Tonga, perhaps Vanuatu (the article mentions the Vanuatu XV all-time debut), perhaps some other... The article mentions also New Zealand A and Australia A but probably it's referring to the 7s championship hosted by same Fiji few weeks before.
I think the XV championship will be a qualifier to the WRWC

I don't know if it was already known but there will be Zambia v Zimbabwe this saturday, as curtain opener before the men's same match.
The info comes directly from the World Rugby fixtures list https://www.world.rugby
Top

It's a pity though that there was a complete lack of information about the game and teams before the game, and I'm not sure we'll see much post-match either!

It looks like it was three tries apiece and either two penalties for Zambia or they managed to convert all three tries...
Top

Three tries converted by Zambia, you may find some infos and photos on Tom Chaloba fb page. Curiously the score was 0-0 at halftime

Samoa confirms more or less the dates of the Oceania Championship (18-30 november, while PNG article said 18-26 november) and they're going to organize trails in Samoa, NZ and Australia to form the team.
So at least three teams competing: Fiji (hosts), Samoa, PNG.
The new supposed dates 18-30 could mean four days of games instead of three? We'll see
Also confirmed that the tournament will be also a World Cup qualifier
Top

World Rugby wrote:Oceania: The expanded Oceania Women’s Rugby Championship 2019 will act as the WRWC 2021 qualifier with the winner qualifying directly to WRWC 2021

Expanded maybe to eight teams with Australia A, PNG, Vanuatu and "X" but it would be a weaker pool than the other.

Thanks, Sjbret, very interesting. Of course I hope they will be 8 teams and not just 4. Even if, as you pointed out, it would be strange to have Fiji, Samoa and Tonga (1st, 2nd, 3rd classified last year) all in a pool and the other Oceania minor teams in the other pool.
This second hypothetic pool could be formed by Australia A, PNG and two hosts like Canada A and Japan Students

I suspect that Vanuatu will play just on the 7s tournament, they have never participated in Oceania 7s and it's unlikely they will debut directly with the XV format
Top

Canalina wrote:Three tries converted by Zambia, you may find some infos and photos on Tom Chaloba fb page. Curiously the score was 0-0 at halftime

Zambia will move up to 34th in the World Rugby Women's Rankings above Uzbekistan as a result of the win with Zimbabwe falling below Botswana and Madagascar to 44th.

There will be live streaming for tomorrow's test match between South Africa and Spain:
https://www.laligasports.es/directos/ru ... -sudafrica
Top

HT 5-15. Strong wind and lack of discipline from local side.

Tomorrow the Mozambique national team play a match versus a south african club. XV? 7s? The poster doesn't specify it. It could be one only XV game or a series of 7s matches (from 14.00 to 17.00, the advise says)
https://www.facebook.com/federacaomocam ... =3&theater
EDIT: no, sorry, it says "friendly games". Plural. It must be 7s

According to ScrumQueens also Portugal would (finally!) re-giving life to their women XV team, with a series of stages programmed in the incoming season
Top

South Africa v Scotland should be interesting: #11 in the World versus #12

Was it XV? So it seems

I was wondering why the men's RWC board didn't organize a women test match as curtain raiser of a RWC match. To promote women's rugby. In a minor town like Kamaishi, for example. A thing like Japan vs Rest of the World. Maybe it's the same World Rugby that don't want to mush up the things, letting the World Cup to stand alone
Top

An other image of Mozambique senior. Their red & black uniform seems ideal for that Coca Cola sponsor 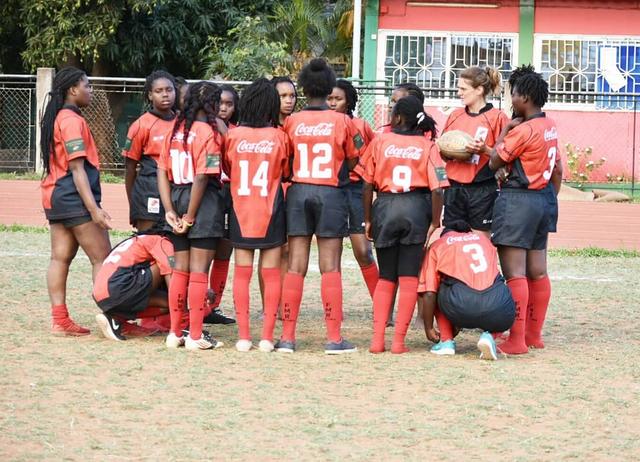 I picked up RTL 2 Channel here in Croatia which is my current stop and currently on RTL 2 they are showing a Female Rugby Player on atv the commercial is for Personal or Pension insurance etc. It has aired the last 3 nights and wondering does any know who the player is who gets the channel?