Yes, like against Romania and Germany last season.
Top

NedRugby wrote:I suppose these are semi-finals and so details of the next round will have to wait.

Interesting, if so, as no Belgium. Maybe they have been relegated to the Trophy after all? Not like Belgium to miss out on 15s.
Top

Somebody on the men's subforum said Belgium is facing financial struggles and has canned a number of programs, including women's XV, to focus on men's XV and women's 7s.
Top

Armchair Fan wrote:Somebody on the men's subforum said Belgium is facing financial struggles and has canned a number of programs, including women's XV, to focus on men's XV and women's 7s.

One other throught on the Euro draw is that home advantage may have been influenced by climate. Unlikely you could reliably play matches in Moscow in February, and even rugby in Germany tends to go into hibernation at that time of year.
Top

hmm really depends, Rhineland climate is very mild, if you have a nice pitch it should be no problem to play there, under normal circumstances
Ceterum censeo Sex Nationes esse augendas.
Top

Great win for Sporting Portugal in the second edition of Copa Ibérica, 26-8. Unsurprising given Olímpico's current form and issues with forwards in recent national games, but nevertheless a big scalp for Portuguese women's rugby and a tragedy from our side:
https://twitter.com/Rugby_femenino/stat ... 0171769857
Top

I doubt there are many foreign players in Sporting Portugal, so basically they would have a national XV team all ready and performing. I (we) wonder why they don't try to play a test match somewhen
Top

Because there isn't even a XV league. They play sevens or tens and Sporting assembles a XV team that only plays friendlies and this cup.

Anyway I believe they have three foreigners, two Kiwis (one of them was world champion in 2017, Mata'u) and a Brazilian.

But if they are able to defeat so neatly a Liga Iberdrola team, they must be definitively not bad. I'm pretty sure they could match (and maybe defeat) the Euro Trophy nations. Maybe FPR is just not interested to develop a women XV program but I've always heard that more or less all the women players in the world are eager to play XV and obviously eager to play in the national jersey, so a test match should be a great reward for these portoguese players
https://blog.rugby.it
Top

No, they aren't bad. I was already surprised last year when I saw their forwards and I thought they would have their chance this year given Olímpico's form (6th out of 8 teams in Liga Iberdrola, only two wins, lots of injuries). And of course I'd love to see them play test matches, but it won't be that straightforward. Performance may not translate well and they lack depth.
Top

They are thinking about playing in the spanish league if nothing change in Portugal. Years ago there was an idea to mix the north portuguese league with the south galician but finally nothing happens.
Top

6N 2019 Referees' ranking by nation. 5 points for every head referee ("arb" on the image), 2 for every side assistant ("gdl"), 1 for every TMO. "Maschile" means men's, "femminile" means women's
Italy has no one referee in the men's competition, as Scotland, but it's second in the women's one.
To be noticed that this time there are no women referees in the men's tournament 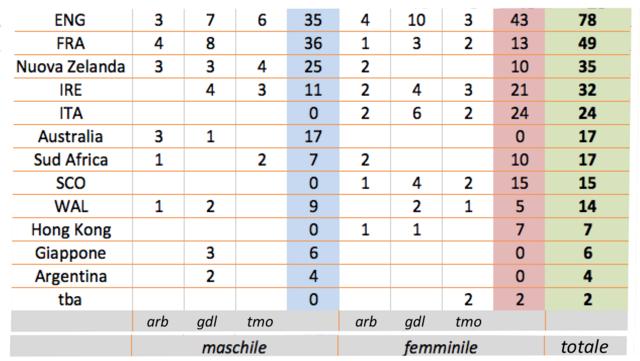 29 nations played at least an international game (116 nations in the men's): twenty-eight from the world ranking plus Zambia.
Some top twenty nations -Portugal, Kazakhstan, Japan, Russia- didn't play neither a match.
Between the various details we see that Spain has the best percentage (four matches played, 100% victories) and that no one game ended in a draw

An interschool XV tournament should debut in Sri Lanka in february

The Rugby Football Union announced it would reintroduce contracts for 15-a-side players. Contracts were previously awarded based on the next major tournament.
In addition to the 28, seven players are on elite player squad agreements.

That is a really strong group of women.
MLR Podcast: https://soundcloud.com/earfulofdirt
Top

No one XV competition in the first version of the Asia Rugby calendar, but I'm pretty sure there's still room for new fixtures

Canalina wrote:No one XV competition in the first version of the Asia Rugby calendar, but I'm pretty sure there's still room for new fixtures

You are right, I hadn't noticed it
Top

I admit I didn't expect Sevens players to show up and I'm not sure it's wise given their position in World Series...
Top

I admit I didn't expect Sevens players to show up and I'm not sure it's wise given their position in World Series...

Also they just need to avoid relegation in World Series - which they really should do.
Top

Do you know if Spain v Scotland will be live streamed, this sunday?

During November window FER also offered a streaming here, but it isn't announced yet:
http://canalferugby.tv/
Top

Users browsing this forum: No registered users and 6 guests