Uruguayan referee Joaquín Montes retired this weekend from international rugby after a 12-13 year career. You may all recognize him from numerous ARC matches from his distinct hair, or lack thereof.

Here is a pic of him during (one of) his first international matches in 2006 between Brazil and Colombia in the Sudamericano B tournament. Torrential downpour.
https://www.instagram.com/p/Bupbi3YgDat ... _copy_link
Top

Berchesi returning vs Brazil. Good to see this developing more and more into a rivalry.

I don't think he's ever played in the ARC apart from the qualifying game against Canada, and the following game.
Top

Daniel Hourcade talks High Performance in South America - High Performance is more than a title. Nothing significant here but gives an inside look at how Sudamérica Rugby is trying to formalize the high performance programs across the countries.

About LAR, Paraguay and Colombia are fighting for the 8th franchise. World Rugby asked them to include between 3 and 6 islanders in each team. On March 29, the UAR council has to approve the project for the next 4 or 5 years.

The ARC will run from late August to early October. The Challenge will run simultaneously. And the long term idea is to make those competitions RWC qualifiers.

Also, Rodriguez hints that Argentina might finally create their women’s XVs and try to qualify for the 2021 WRWC.
Top

All good news. I have a feeling that Colombia will not get in, in part considering the fact that Sebastian Mejía (most recent captain transitioning to coaching) posted on Instagram asking for anyone who wants to invest in rugby.

I very much like the idea of Islanders in the league, I think they will be happy to live in one of these countries playing rugby but the language barrier might be difficult. They will add some much needed flair that will excite fans. I personally believe that Latin culture and Islander culture can have the same kind of free style kind of life, especially in a beach town. Like if a Fijian moved to Barranquilla you wouldn't even realize they were Fijian.
Top

I'm quite sure that if there should be an expansion, Colombia would definitely get a team (or two).
Top

Yes they should definitely get one and I think it’s wiser to focus on year 2. Build up their HP program and get at least a year under their belt so the transition to pro isn’t so huge. We’ve seen from MLR how big of a difference 1 season has made in getting new sponsors and awareness so it makes more financial sense to wait, unless they have a sugar daddy.
Top

I just read the article. He believes that the Currie Cup is the best short term answer but that LSR will be the best in the long term which is encouraging to hear. I was afraid they would focus more on a team in the Currie Cup and “ignore” the LSR (though the timing is nice that they can do both), or at least favor their players going to the Currie Cup if there were limited finances.
Top

Non-African teams in the Currie Cup -to me- is a travesty.
Top

I mean, it's a travesty in the sense that Argentina is able to send a team but the countries surrounding South Africa are not able to send their own teams to the Currie Cup (with the Welwitschias backing out due to financial issues). But Argentina plays in the South African Super Rugby conference.

I really like the setup that's coming around for South America, it'd be a shame to see the World League come in and fuck that up. LSR and Super Rugby run from February to July, ARC/ARCh takes place in August to October and will eventually be used for RWC qualification. Then throw in the July/November tests for anyone who gets those. The schedule will be able to line up nicely across the continent and help set a consistent schedule as these countries grow the sport.

Another thing to point out is that Rodriguez says Argentina will be above all the other countries in terms of importance for the board. I mean, we all knew this but to hear him confirm it is interesting.
Top

But the UAR will have Argentina XV in the ARC and the Pampas in the Currie Cup at the same time.

Perhaps Arg XV will focus on under-23 players.
Top

It appears that Currie Cup is not a long term plan. There will be a conflict for the time being but it should work out in the end.
Top

Currie Cup participation was one of Ledesma’s conditions before accepting the job. I don’t know how long they can pay for it but for now it is a bigger priority than the LAR or the ARC.
Top

It looks like Romania will tour Brazil too. But they could also face Uruguay...
Brazilian Rugby News: www.portaldorugby.com.br
Top

The source is icky but Argentina could play Japan before the RWC. Maybe the last weekend of August? > https://www.eltribuno.com/salta/nota/20 ... r-en-salta

victorsra wrote:It looks like Romania will tour Brazil too.

Chile and Brazil have two matches scheduled according to their calendars. Those are generally inaccurate. Last year the CBRU scheduled an Asian tour that never came into fruition.

Colombia has a rugby TV program, it looks like their plan is to air it every Monday and the show lasts around an hour. It includes interviews with the FCR president as well as a bunch of players. I’d watch it but haven’t acquired an ear for Spanish yet. 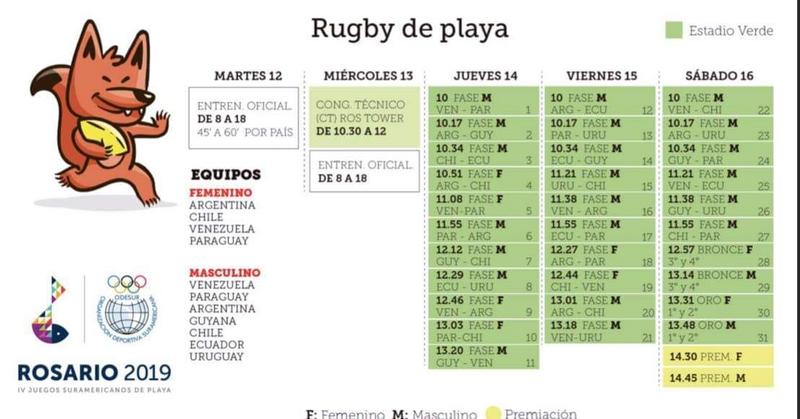 Hm, I hope Emerging Italy will have some fixtures too
https://blog.rugby.it
Top

Canalina wrote:SouthAmerican Beach Games started in Ecuador
No Brazil in beach rugby
The mascot is a south-american fox

This Beach Games are unknown here. No news, no broadcast, nothing. They woudn't spend money on it... Beach Rugby must be in the offseason.
Brazilian Rugby News: www.portaldorugby.com.br
Top

Sorry, I've lost orientation: exist it anymore a south-american championship? (like the old Mayor A or the 2018 Six Nations?)
With all these new tournaments and hypothesis I missed which tournaments are going on and which have ceased.
Top

The South American Rugby Championship A, now also called 6 Nations, is played every May. The 2018 edition featured two groups of three teams which cross-played. A similar format is expected for 2019.