Great resource! Nice to see Nauru scoring a try in both of its first two games, and also tiny Niue performing well on its return from the wilderness. Latest report from the Post Courier: https://postcourier.com.pg/pukpuks-face ... n-islands/

The only issue with bringing in more teams heavily reliant on diaspora in rugby-strong nations such as NZ & Australia is whether this is going to be the most effective use of funds intended for the development of global rugby, given many of those players will already have access to the best training and facilities available.

Cook Islands name change looks interesting. I'm all for it. I'd be quite happy to see not only the Pacific but the entire world revert to its pre-colonial original names. I have cousins from the Cooks, in fact. I also had a few friends at high school from that part of the world, who referred to themselves exclusively as Rarotongans, never Cook Islanders. I don't believe I met a Tongan until I went to Auckland, however.

The theory of Polynesian migrations out of South America has long since been disproved, in spite of Thor Heyerdahl's bull-headed publicity stunts. South East Asia has been the melting pot for Austronesian and Asiatic peoples for thousands of years - and still is. This is what led to the Polynesian migrations across the Pacific. They reached Tahiti from Samoa, and Hawaii and NZ from the Tahitian Archipelago. Wars were fought over territorial disputes and competition for resources, of course. But comparing inter-tribal conflicts to colonial genocides, greed and cultural extermination goes beyond bizarre.

Meanwhile, Samoan-New Zealanders make up 3% of the nation's population but a quarter of the All Blacks. https://www.samoaobserver.ws/category/sport/48223

Incidentally, Samoans also have the highest representation of any ethnic group in the NFL per capita and are 56 times more likely to make the pros than non-Samoan Americans.
Last edited by Edgar on Thu, 29 Aug 2019, 21:56, edited 2 times in total.
https://www.theroar.com.au/author/istanbul-wingman
Top

I would like to know what's happening in Vanuatu as they were out of the Pacific Games and Oceania Cup.

Tahiti we know is in internal fight with 2 federations.

And what about New Caledonia? They are FIFA members but no WR members. Why? Only a IOC-ineligibility thing or is there a lobby from the French rugby to make New Caledonia a provider for Les Bleus?
Brazilian Rugby News: www.portaldorugby.com.br
Top

4N wrote:A few pages back I posted a “dream” Cook Islands XV. Apparently there are more Cook Islanders in NZ than Tongans. If you combine the populations in Australia, NZ and the Cook Islands you get over 100,000 people. So they have a good player pool. I’d like to see them given a shot in a decent tournament with WR backing. I think they could be better than some of the teams going to the RWC this year.

PNG too. I'd like to see the Cooks, PNG and Solomons, at the very least, facing Fiji, Tonga and Samoa more regularly. PNG is rugby league territory, but I've never understood why rugby has never been able to find a footing there also. As you say, the Cooks have a lot of expats in NZ and Australia.
Top

victorsra wrote:I would like to know what's happening in Vanuatu as they were out of the Pacific Games and Oceania Cup.

Tahiti we know is in internal fight with 2 federations.

And what about New Caledonia? They are FIFA members but no WR members. Why? Only a IOC-ineligibility thing or is there a lobby from the French rugby to make New Caledonia a provider for Les Bleus?

Well, you have to look at player numbers to begin with, and in Vanuatu and Tahiti they are very minor, numbering in the hundreds rather than thousands. This in spite of the fact they are two of the most populous islands in the Pacific with 270K and 180K inhabitants, respectively. So too is New Caledonia (270K), but it remains a colony of France and its rugby is very much integrated into the French system, so a promising player from the islands would simply focus on making it in the French leagues. I guess the fact rugby wasn't remotely mainstream in France prior to WWII meant the game failed to take root during the early colonization process and did not become part of the national identity the way it did in Fiji and Tonga, where there are 120K and 20K players (from populations of 900K and 100K), respectively. Even in Samoa, which was briefly colonized by the Germans, it has fewer players - 12K from a population of almost 200K), while in American Samoa there are a paltry 400 reg. players. As for PNG and the Solomons, numbers are relatively low there too (only 3K in the former), and no doubt there are financial limitations. Unsurprisingly, therefore, attempts to integrate 3rd tier Pacific rugby with 2nd tier have proved disastrous historically, with huge scores being conceded by the likes of PNG, the Solomons, Vanuatu, New Caledonia, the Cooks, Tahiti, Niue and Wallis & Futunu against Fiji & Tonga at the Pacific Games - including centuries in the days of 3 point tries! This continued right up to the late 70s & early 80s, and incidentally I see that Wallis & Futuna did play at the 1979 edition, meaning their particular hiatus has now reached 4 decades (rather than 5). Meanwhile, a report came out a while back describing Wallis & Futuna as the nation which produces the most professional players per capita. Its population is only 13K (though there are twice that number living in New Caledonia), yet it has produced "hundreds of professional and semi-professional players across Europe." https://www.rugbypass.com/news/tiny-nat ... ita-earth/

Sorry, but player numbers are useless as I mentioned before. They mean very little because it is up to each union to deliver the numbers. A union in a country like this might count just the number of players involved in an official competition and simply not count all people involved in informal rugby.
Brazilian Rugby News: www.portaldorugby.com.br
Top

Or how much does World Rugby invest elsewhere.
Top

I think 65 mil $ tops the sun of all European countries (minus 6N) combined for 2 years if not more.
Top

I think 65 mil $ tops the sun of all European countries (minus 6N) combined for 2 years if not more.

I think 65 mil $ tops the sun of all European countries (minus 6N) combined for 2 years if not more.

I was rather thinking to a sum of all divisons budgets, REIC, RET, etc.
Top

It's a much closer game than I expected, just 10 - 8 to PNG at the moment in 2nd half and Solomon's came close to a try but for a knock-on at the line. Commentators for these matches are really fun to listen to!

15-13. Solomons are in this but missed a shot from right in front.
Top

PNG win Oceania Cup with a hard-fought 15-13 victory over the Solomons in Port Moresby.

Solomons got a try between the sticks after a series of penalties late in the game, PNG player in the bin, but the kicker attempted to drop-kick the conversion from in front - and missed!! The Solomons continued to apply all the pressure and PNG received another yellow card, but the visitors failed to capitalize.

Solomons have no-one but to blame but themselves. Took a drop kick conversion from in front and missed it.
Top

That said, seeing them fight this hard is a good thing. We need to get PNG and the Solomons to continue on from this. Oceania needs these teams to challenge Fiji, Tonga and Samoa.
Top

Well the commentators gave the final Niue v Nauru score as 96 - 5. I think the final conversion - from wide out left - was attempted by the hooker!
Top

Score was all over the place.

I had a quick scan through the 2nd half, starting from when the score was 34-0 (assuming that was the correct half-time score), and I counted 82-5.
http://theroonba.com Results, fixtures, rankings
Top

And for more confusion the result at Worldrugby is 87 - 0! Yet Nauru were clearly awarded a try in the 2nd half...
Top

I make it 89-5.
Mistake from commentators came after Nauru try, where they added 7 points to Niue's total as well as 5 to Nauru.
http://theroonba.com Results, fixtures, rankings
Top

Official result; Niue 89-5 Nauru (via Nauru Rugby Union FB message via Oceania Rugby (who would not reply to me)). 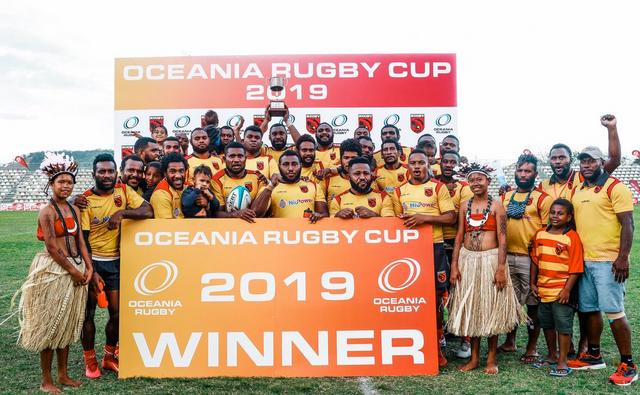 * Oceania Rugby seems confirming Tahiti as past trophy winners even if World Rugby disqualified them due to a double infringement in eligibility rules http://www.oceaniarugby.com/content.asp ... 726|37358s

Polish wikipedia, that is often the most up-to-date of all the versions, shows Cook in place of Tahiti as winner of the Oceania Cup 2017 https://pl.wikipedia.org/wiki/Oceania_Cup
Top