View topic - The rugby law book will be cut by 50%

i have a hard time seeing how they'll manage to do that. What could they get rid off?

Thank God. Sanity has prevailed. Im not an expert on the lawbook but I would think a lot of the sublaws and trying to clarify instead of leaving room for interpretation. A least that's what I would hope.
Top

Ha ha, Hansen just said that and after few days rugby Gods do it.

NO, it is nothing NEW

Theere were three working groups within it:

The latter was comprised of:

By 2016 they have ALREADY done one STUPID thing:

How they could cut writ by 50% is beyond my imagination

If they proceed with the project, it would be THIRD time in my life-span
that I translated the Union Lawbook - done that in 1990 and again in 2000

.And definitely he has a point but how they cut 50% is beyond me.
Top

I don't know about 50% but I agree that you can make the rules a lot simpler.

with the Maul I liked the ELV that you could sack it/tackle the man at the front. There was a panic about potential injuries but I never saw any data showing an increase in injuries and it didn't remove mauling from the game, just made them more dynamic.
Top

sk 88 wrote:I don't know about 50% but I agree that you can make the rules a lot simpler.

with the Maul I liked the ELV that you could sack it/tackle the man at the front. There was a panic about potential injuries but I never saw any data showing an increase in injuries and it didn't remove mauling from the game, just made them more dynamic.

Never understood much of the hysteria around the ELV's.
Top

From what I could tell the panic seemed to be about there being less penalty goals. The only way I think you get rid of 50% of the rule book is if you simplify the ruck and maul. I don't know how you do that without shifting to a rugby league style situation, and the only way I think you do that is by taking the contest out of the breakdown. To be honest we see examples of that in the modern game already with teams not committing players to the breakdown at certain times in defence, so maybe it's a natural progression for the game to make that a law.
Top

LENGTH OF LAWS
by 2017 edition
MEASURED in A6-sized PAGES

So, eradication of CONTEST, ie TOTAL LEAGUE-zation = 38%,
no way promised 50%

No news -- should have been approved (in principle) yesterday, amid RWC 2023 jostling

But who cares for (pitty) Laws ?
Top 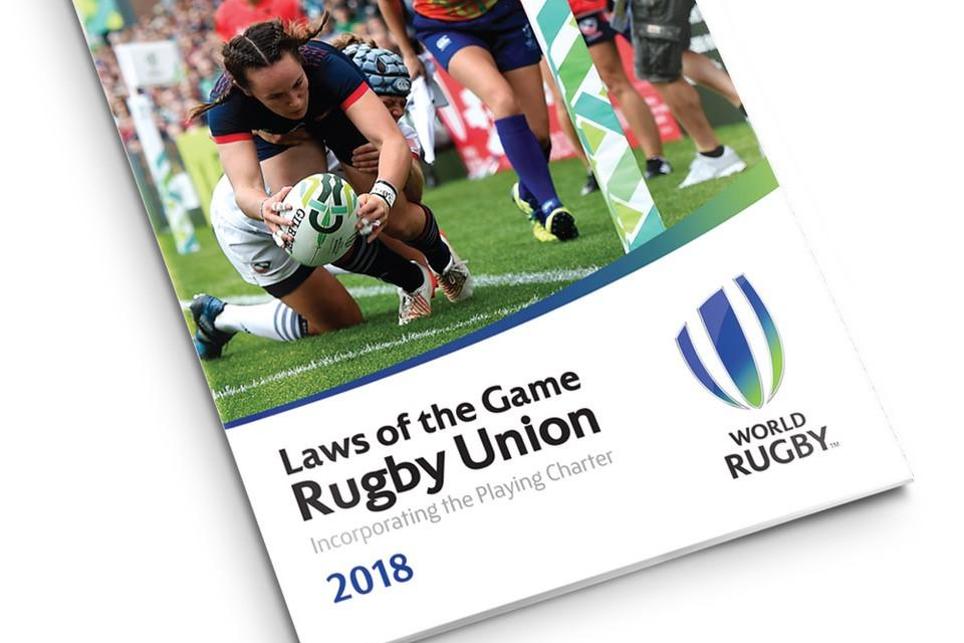 e.g. Former
20.5 THROWING THE BALL INTO THE SCRUM
20.6 HOW THE SCRUM HALF THROWS IN THE BALL

* New feature - TABLES, showing what happens in various cases
e.g. Event >> Location of the mark of >> touch Who throws in @ p 79

* Noted already - in another thread: new - 4 COLOR CODING for sanctions

Red - award of a penalty
Green - award of a free-kick
Blue - award of a scrum, restart kick, quick-throw or lineout
Gold - disallowing of a kick. -- but this color HARDLY visible in print - could be replaced by GREY

If there is NO room for former Law 7: one can run, pass, tackle etc etc
then maintaining | explaining at large that
INTEGRITY • PASSION • SOLIDARITY • DISCIPLINE • RESPECT
are so vital -- seems RIDICULOUS and OUTDATED

* And of course, TRENDING SATANISM -
putting odd-numbered pages on LEFT and even-numbered ones on RIGHT

Is a WR page-layer | designer an IGNORANT | REBEL

e.g. when I look for, say, page 19 my glance goes RIGHT - not LEFT
and I end up embarassed

::: Best wishes for New year to ALL

This threw me as well.

Its so confusing to have loads of different rules floating about.

Overall though this is a good re-write.

One further point I may have missed. Is a "grounding" defined anywhere? It isn't in the glossary in the back but is used when discussing a try. Can you ground the ball with your knee? Your head? Your foot? I can't find where it rules areas of the body in or out anymore.
Top

Many useful staff could have been cut inadvertently

Could NOT deal with CLUMSY numbering, though

For NOT alienating sections of rugby public

I've found it. For some reason it is only defined in Law 21, rather than in the glossary despite being used earlier in the book.
Top

Arrive at the tackle from the direction of their own goal line before playing the ball.

There is a GROSS navigation error at
http://laws.worldrugby.org/

So, to access STILL valid and available
*Laws of 2017* in those languages, one

I'd rather continue one-man crusade

* Yesterday at first chance have printed out
abridged 120-page version, without charter and tens

* Read through randomly -- fine re-write ... but still noticed
some STREETWISE and SUBTLE changes to the Law
despite WR's honest claims to the opposite

Say, Mr Poite is GETTING a late reprieve for
his overturning that vital, contentios decision
in the last play of NZL - LIO decider

11.7 OFFSIDE AFTER A KNOCK-ON
When a player knocks-on and an offside team-mate next plays the ball, the offside player is
liable to sanction if playing the ball prevented an opponent from gaining an advantage.
Sanction: Penalty kick


Now OFFSIDE | ONSIDE has been shortened to just 3 pages (55-57) and
that HARSH, UNFAIR and OUTDATED 11.7 has been REMOVED altogether

We are just left with this @ p 55
http://laws.worldrugby.org/downloads/World_Rugby_Laws_2018_EN.pdf

(10).5. A player is accidentally offside
if the player cannot avoid being touched by the ball
or by a team-mate who is carrying the ball.

Only if the offending team gains an advantage should play stop.

So, currently there are actually TWO different sets of Laws
+ Global Trials which are not reflected in 2018 re-write at all
but this could be seen as a cost of ... quiet REVOLUTION

Will be printed on 1 AUG 2018 - before next domestic saeson

FR has been added as well

RE-DIRECT added to ALL other languages
but in EN, this way:

2018 laws are in production

The laws of rugby have been simplified and retructured for the 2018 law book.
World Rugby is working to roll out this new content across our various languages.
Your chosen language is not yet available.
In the meantime you can browse the 2017 laws site.