Portugal returns in 1st division on fire. They were always hard to play against. Good job Portugal.

Romania lost their strength. Which is disastrous for this championship.
Top

The spectators figures dropped in the fourth round: 3100 in Bruxelles, 3100 in Krasnodar (and they seemed way less in the video), 2000 in Paris
Top

Armchair Fan wrote:A professional league will only exist based on current División de Honor. And clubs have their plans but they seem to be on stand-by waiting for a more favorable head at the top of national union.

What I like about the Division de Honor is each rugby city or region has 2 teams; Santander, Basque, Valladolid, Madrid, Barcelona. As the profile of the league grows these local rivalries will add a vibrancy to the character of the sport in Spain, which will be quite unique to Spain.
It would quite obvious to launch a professional Iberian league with 6 teams, 5 in these areas of Spain, and one in Portugal. But then these local rivalries will be lost. If it can grow organically into a professional league then it will have deeper routes and will all the better for it.
Look at Wales for a lesson in how to kill the soul of rugby.

A couple of questions which I hope someone could answer , Is there a reason Spain and Portugal are doing well this year and what would it take for these countries to kick on and move up the rugby world rankings
Top

In spite of being neighbours, answering that question means finding different answers and analysis for each case because we aren't that similar as some think from the outside. The easy answer for both is at least additional 5 M€ per season, but who knows how these can be found.

Let me be clear. Portugal is doing well this year, Spain isn't doing that well. We're worse than last year and there is a pending case about fielding ineligible players earlier in this REC that may see us lose points later.

That said, Portugal spent three years in Rugby Europe Trophy that have given them enough time to breed their youngsters (great results in U18 and U20 for the past five years) while not calling most of their French-based players. Administrative chaos seems now forgotten, they have got new leadership in their union and signed Patrice Lagisquet with a clear aim of knitting new links with France. The mix of great youngsters and their foreign legion has worked extremely well, way earlier than I'd have expected. But challenges remain as their domestic competition is probably the most amateur among REC nations only second to Belgium, so their younger players must find somewhere else to develop (Storti and Portela signed with Peñarol in SLAR) or FPR will have to find funding to give a franchise or Portugal XV a meaningful calendar. And that funding doesn't necessarily should come from World Rugby, I'm sure there is a lot to be done in marketing and ticketing at home.

In our case, this is the consequence of a plan that has been running for several years. Betting on French-born players increased competitiveness and fan/media attraction, increasing budget, which at the same time allowed for more training camps where players from domestic league have been learning test level. Very few guys earn now their first cap without having been training on and on-and-off basis with national team for a year. Domestic league has improved, clubs budgets increased and there are lots of foreign-born players now based in Spain, theoretically eligible... yeah, let's see what happens with that ineligiblity case, but it is what it is. Junior results have equally been good, maybe a little less than Portugal, but close enough and our guys have tried their luck in France and England more often than Portuguese, meaning they intend to be pro. The issue here is a bigger pool of players means we need more resources. And running XV and 7s programs, while caring a lot about women's rugby compared to other unions, means even more resources diverted... So we absolutely need more money. And maybe keep walking towards a professionalised domestic league, because I fear the current model already reached its peak and we've got too many youngsters in 'make or break' situation. All these points will be raised soon as there are union elections this year and opposition is strong.
Top

Also, Russia and Romania have got worse. No one is closing the gap on Georgia.
Top

Chester-Donnelly wrote:Also, Russia and Romania have got worse. No one is closing the gap on Georgia.

That's not the worst of it. Georgia is having a bad year as it is and even then we're pretty much breezing through the opposition. This tournament has been dying for a while but we can officially call it dead now. The only thing that kept it alive was Romania more or less maintaining some level of decency for a while but now that their last decent Generation is Gone it's over. Spain and Portugal are bound to have those exceptional years once every five or six tournaments but that's not what the tournament needs. You need stability.
Don't Pray For Easy lives, Pray for enough Beer!
Top

Rebuffs are usual when you change generations and this is what is happening with many REC teams, including Georgia (never understood how GRU was without an option to replace Haig, they're the most professional Union) , Romania, Spain etc.

LE: also I don't get why many are disappointed of this year REC, had more thrill then last ones e.g unexpected wins (Spain won in Russia, Portugal beat Romania, Belgium close to beat Spain, Portugal put up a good match vs Georgia); future looks good with TMO and HIA. Let's look at the perspective and not make wedding at a win and funeral at a loss.
Top

Russia - Romania or comedy of errors. 3 tries butchered on the tryline (1 Romania, 2 Russia) and mistakes every 20 seconds of the game. This game was Trophy level for real. Anyhow fully deserved win for Russia.

Belgium looks like they got Spain number in the scrum and with few drops of rain they could beat them i guess.

Portugal - Georgia was something else. Oh Portugal, we can run but we can't hide from it

.They are the darkhorses for the next qualifiers.
Top

I've read that the whole fifth round of the Six Nations has been postponed to an unknown date (october?)

Could be at risk also the last round of the REIC?
Georgia and Romania are quite safe from Covid19, so far, so I presume their two games will go on. Maybe some risk of postponement/cancellation for Spain v Portugal and Switzerland v Netherlands (Trophy)?
Top

Young and Sport Minister of Romania declared on 8.03 that all activities involving more than 1000 spectators should be postponed for the entire month of March. This should include also the Rugby match Romania-Belgium. On the FRR site there is no info about postponing the match. Maybe they are not awaiting for more than 1000 people on the Stadium of Botosani. At the match against Spain they were counted 1500 spectators.
http://mts.ro/media/toate-activitatile- ... eventie-i/
https://frr.ro/2020/03/09/romania-prega ... ectionati/
Top

The game will be played but without spectators.
Top

probably it will be played without spectators or they will issue a limited number of tickets.

Instead the entrance to Switzerland v Netherlands will be permitted to a maximum of 1,000 spectators. If they will not decide for stricter measures in these days
Top

RugbyPUBtbilisi wrote:Portugal returns in 1st division on fire. They were always hard to play against. Good job Portugal.

Romania lost their strength. Which is disastrous for this championship.

Contenders for RWC qualification for sure. Great revival.
Top 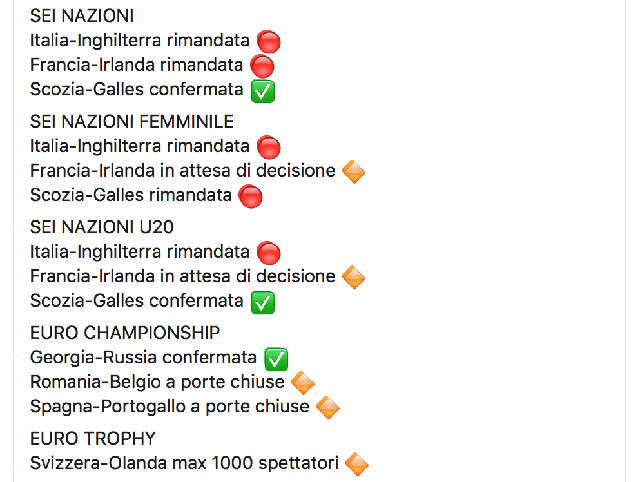 Germany v Lithuania (march 21) behind closed door, but the DRV seems ready to postpone the match ("we can only cancel a Rugby Europe match as soon as an official order prohibits the game from being played")
Top

GEO-RUS behind close doors -- tickets to be reimbursed

It would be possible to play in Russia.

On FRR site there is still no update.
Top

Vova12 wrote:It would be possible to play in Russia.

Yes, in Sochi we can definitely also play this fixture without spectators.
Top

They update it today:

Also U20 Championship from Portugal was postponed.
Top