Qatar was not yet a member of World Rugby in 2019. It is this criterion that is taken into account to be promoted. China will be one to watch closely with its column of foreign players. They are aiming for the 2027 Rugby World Cup.

Thailand, which wants to launch its professional rugby league in the coming years, will also be one to watch.
Top

With China and Pakistan being promoted, I guessing the group will be Kazakhstan, Guam and Qatar?????????????

Another highlight of the year will be the Asia Rugby Men’s Championship (ARMC) which is a qualification pathway tournament for the Rugby World Cup 2023 in France, with Japan already securing a spot after reaching the Quarterfinals in the 2019 Rugby World Cup.
The winner of the 2021 ARMC will play Oceania 2 in a one-off game which will be hosted by the team with the highest ranking, with the winner securing a direct spot in the RWC 2023, and the loser going to the final qualification tournament.

Extremely disappointing. Everyone eliminated except for South Korea, Hong Kong and Malaysia
Top

Sad that India, the country where rugby is BOOMING

Well, sarcasm apart, it is not fair to let the other countries out. It is crucial to have countries like India, Indonesia, etc active.
Top

An other resume of the Asian 2021 competitions

Women will have their own championship!!!!That is an excellent new for an arab tournament.
Top

"In light of the pressing financial and logistical implications arising from the Covid-19 pandemic, the Hong Kong Rugby Union (HKRU) will transition its full-time men’s fifteen-a-side representative programme to a traditional semi-professional model and will close the Elite Rugby Programme (ERP) after the expiry of current player and staff contracts on 30 June 2021. "

Given the unprecedented and protracted impact of the pandemic on the rugby calendar, (including successive postponements of the Cathay Pacific/HSBC Hong Kong Sevens and uncertainties around the commercial impact of the move to Kai Tak Stadium, the end of Global Rapid Rugby, a 10-month delay in the qualification process for Rugby World Cup 2023 and the delayed inception of the Asia Pacific Rugby Championship until at least 2023) - and the expiration of the local Employment Support Scheme, the costs of the programme, which employs 30 athletes on a full-time basis, are no longer sustainable for the HKRU.

Oh, it looks like World Rugby was planning a Asia-Pacific Championship, I believe in the Americas Rugby Championship (RIP) fashion (a Oceania Rugby-Asia Rugby joint thing?). I guess something with Hong Kong, Korea, Samoa, Tonga, etc? HK suggests it is supposed to kick off in 2023.

The Asia Rugby Championship is alive, it is part of the 2023 RWC Qualy. It is schedule to kick off in May 2021 https://www.asiarugby.com/asia-rugby-calendar-2021/

Just came across these news (HK losing their pro structure, an "official" word for the cancellation of GRR) I'm both surprised and obviously extremely saddened to read this as I personally was backing a RWC expansion with a better pathway for a second Asian side. They seemed to be closing some gaps but with this scenario possibilities will be extremely limited.

The virus has screwed up everything for Asia professional. GRR never got the chance to truly get off the ground. I am hoping though that both Australia and New Zealand look closer to home and maybe help foster something to develop in the region, because there's clearly an appetite growing.
Top

Well, Malaysia Valke and China Lions were two fictions, I doubt they would produce anything sustainable.

Anyway, in China's case, they could start their own league. And they will eventualy, I guess.
Top

victorsra wrote:Well, Malaysia Valke and China Lions were two fictions, I doubt they would produce anything sustainable.

Anyway, in China's case, they could start their own league. And they will eventualy, I guess.

Probably their best option if the Japanese structures will have them. They'll need to find financing for things like travel and accommodation.
Top

victorsra wrote:Well, Malaysia Valke and China Lions were two fictions, I doubt they would produce anything sustainable.

Anyway, in China's case, they could start their own league. And they will eventualy, I guess.

Totally agree on the China Lions take. After all it was practically a Bay of Plenty B side full of kiwis. They didn't even try to look for a connection with the local rugby community in Shanghai, even if it's full of expats, let alone with the Chinese small rugby community. They promised to include more Chinese players to their future roosters but...

The presence of Westerners in Hong Kong rugby responds to the demographics of the city themselves and the sector of the population with whom rugby is most popular. A good portion of Hong Kong citizens are of British origins, and some of the players that get drawn for their representative side in internationals were either born or formed as rugby players in the city. The South China Tigers was a good prospect to give their best players a path to professionalism outside of the amateurish nature of the Hong Kong domestic championship, which in turn would better their representative team, and they were also a better prospect for China as a whole than the China Lions. Truly a big loss.

As for a possible Chinese domestic, and competitive, competition... I just can't see it happen in the long run. The foundations are very weak and most of the rugby clubs in China outside universities are just social clubs run by expats. It will need serious work to, let's say, turn the already existent All China Cup into something competitive that would allow some growth in Chinese rugby and I just can't see it happen unless participation numbers grow dramatically in regions outside Shandong, Beijing or Shanghai for a league structure to be a viable project without relying too much on Westerners. Otherwise it would be more like a ghost league with no connection with the Chinese community. Also I don't see the CRFA in a position to get it done right now.
Top

In Southeast Asia, we know rugby has a following in Malaysia and Singapore (although Singapore realy disappointed recently with poor attendances in major events). If thery want to develop their players, they could start a regional competition with semi-pro franchises, for exemple. More local, more focused on local players, but with some foreigners. If they realy have fans, as some claim, that could work.
Top

A match from the past, re-appeared on facebook
Summer 2000, final game of the Asian Championship between Japan and Korea; Japan up 34-29 in the last minutes, Korea scores a try but it's annulled. Judging by the video it's not clear why (foot on touchline?); according to the caption on facebook there were polemics about this action ("This is the last scene of the Korea-Japan final of the 2000 Asian Championships held in Aomori, more than 20 years ago, by chance. I remember seeing it many times back then. Kwak Cheol-woong's tie or an ambiguous whistle of a referee ahead of a reversal try. However, I am still not sure if it is the absence of diplomatic power or if I did not understand the rules or the procedure of objection"), but I haven't found any further detail

Canalina wrote:Judging by the video it's not clear why (foot on touchline?)

Canalina wrote:Judging by the video it's not clear why (foot on touchline?)

On the opposite site of the continent, this seems to be the new Palestine national team jersey: it could be a source of quarrels, the number one in the back has the shape of the whole Israel+Palestine territory

Apparently it's 7s, but with a twist “The all-Emirati UAE side will play against Israel’s national Olympic sevens team in four-quarters of a game in rugby’s abridged format. The players will then be mixed into two new teams, to be known as Israel-UAE Blue and Israel-UAE White, for three more segments of matches.”
Top

It all adds up for men in the middle of historic UAE v Israel rugby match. GEMS maths teachers Jaco de Wit and Monray Gilbert ‘honoured’ to officiate UAE-Israel 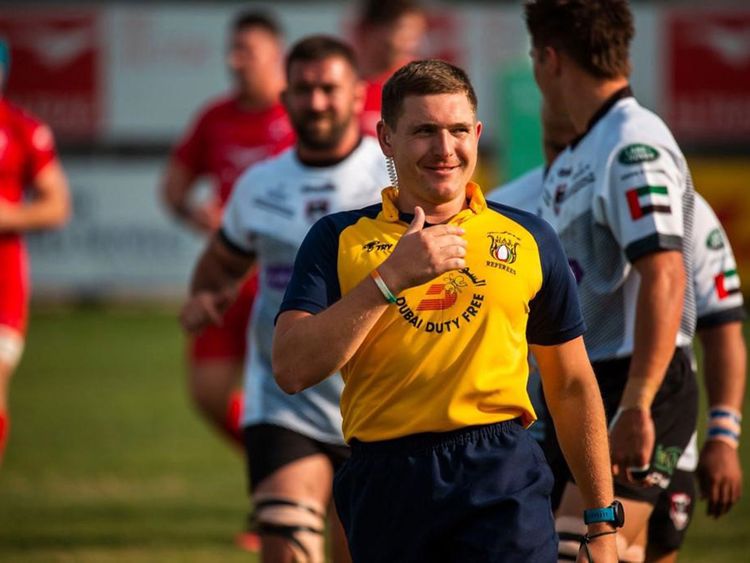 Saigon rugby field, somewhen in the past. I'd say between 1890 and 1920 but I can't be more precise
Definitively the french colonialism was not able to make rugby taking roots in Vietnam as in Madagascar

woh, thanks to you I learn that surlatouch is back ! One of the best sport twitter account in French !
Top

Users browsing this forum: No registered users and 10 guests