Tintifax wrote:- Rugby is more demanding than Association- you must use also your hands & arms not only your legs.

It's interesting that according to this line the distinction between rugby and soccer would be just that in the latter you must use only the legs and in the first you may use all the limbs.
In some of the oldest rugby footages, indeed, there's a lot of use of the feet, included some foot dribbling. I don't remember how the ball was in those times, probably it was more rounded than today.
It would be interesting to see how a modern rugby game would be conducted if played with a perfectly round ball: many foot dribbling? When you touch the ball with the foot the opponent can't tackle you with the arms, so maybe the soccer skills would be important in rugby too
Top

This restriction was abolished in 1958

Interesting as always, thank you
Top

Oldest video of a rugby match in Brazil: https://www.instagram.com/p/B-fTduqAqGp/

It is the 1928 Beilby Alston Cup, the anual match between the representative sides of São Paulo (white and black) and Rio de Janeiro (colours, probably yellow and green) played between 1927 and 1963 as the main competition in the country (and some years after that, but not anymore with the same status). Champions: http://www.portaldorugby.com.br/noticia ... lby-alston

The 1928 Rio side was basicaly a British expats team, but the São Paulo team had already a couple of non-British names: Haddad (a Syrian/Lebanese name, as the Christian Arab colony was large), Bastin (French), Espindola and Queiroz (Brazilian/Portuguese names). Hollnagel is maybe a German name? German colony was big too.

Apparently also Frederic Humbert, manager of the excellent page https://www.flickr.com/photos/rugby_pioneers/, has been hit by the epidemic

The last question is something I think about a lot and I wonder why this is not discussed more.

I think the ball size changes have absolutely changed the game. The ball nowadays is easy to carry with one hand, more easy to catch, kick and spin pass and the bounce is less unpredictable. This ball needs less skill. I see that anybody who start playing the game can handle the ball quite quickly, where in the eigthies people struggled a long time to get any control over the old slippery mitre balls and the adidas ball (used a lot in France and I really loved that ball).

I regret this because it cuts the advantage for the more skillfull (smaller) players.
Top

wooden shoe wrote:... The ball nowadays is easy to carry with one hand ...

I never like when they do that. It seems somehow "disrespectful".
The meaning of the game should be to bring something precious (the ball) to the other side of the field, defending it with your body. To carry that thing with one hand is somehow against the hidden spirit of the game
Top

They've also added a few documentaries and
some classic games.

Some old Origin will be just the tonic for this lockdown period!

You have 8 names?
Top

We are 4 authors
Top

Congrats. Must be a nice proudness to have written a book!

I've just bought the online version of the Italian Rugby Guide 2020 (it has a new edition every year) but it's totally composed by data (results, dates, line-ups, rolls of honor, records...), not by stories
Top

Thanks. But if we fund a publisher to print it nicely we'll ad much more photos.
Top

May I ask you to link me with authors of this book:

You may find the e-mail of Francesco Volpe ("volpe" means "fox", just for curiosity) in this public article; in the last lines

Thank you very much

and there is Melia as well = exactly Fox

Before I write to him, can you, please, check something in spare time for me

I assume it's your collection

Where else could this pic fall from, into my archives

Result of 'Soviet Union 35-9 Tunisia', played on 12/05/1985 in Kiev,
was 'reversed' for unknown reason, probably for fielding banned player

Therefore, I'm keen to establsih the truth,
and if this 'reversal' UNFORTUNATELY is a web FORGERY of 2010s --
to right the WRONGs for good

One could check himself

Of those 4 'language articles' of very same source -- WIKI

each give different | unique picture -- which is UNACCEPTABLE

As for me -- contemporary of those events, and
already keen statistician | collector | writer-in-making,
the TRUE version is this

No, unfortunately that nice collection is not mine. I've just two of those annual books: one on paper and one digital...
In the 2020 edition of the book there's the roll of honor of the European Championships, with no details of the games, and it reports URSS on second position for the 1984/85 tournament 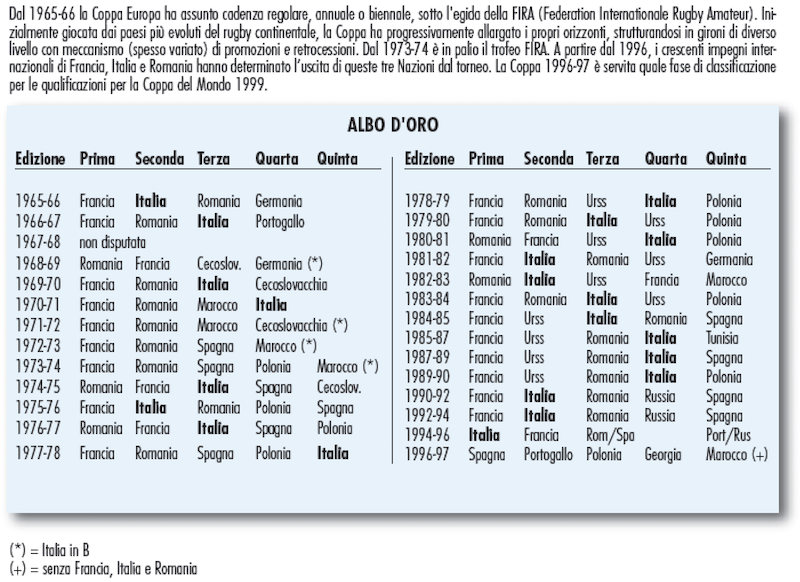 According to the image you posted with that series of books, in the eighties the rugby manual by Pacitti & Volpe was still not published. There was instead an other publication, called Tutto Rugby, written by Luciano Ravagnani and P.Vason; it had at least two editions, in 1985 and 1986.
I don't know Vason but Ravagnani is still writing, for the italian magazine "All Rugby"
This is the list of All Rugby collaborators https://allrugby.it/about-us/
And this is the form to make contact with them https://allrugby.it/contatti/

PS: if you hadn't already done it, I think the best thing could be trying to contact someone in Tunisia, via their facebook page
Top

I'm satisfied re ITA origin: if Italian ANNUAL has it right in 2020
I assume all its previous editions had it same way

* EN simply does NOT understand FORMER '3-team FIRA tie-break':
the author solved it '2020 way' and
put ROM above ITA on better overall difference

TUN and SPN pts are wrong either

* ES is poor: without results,
and standings are wrong from outset: SOV has 4 games and others 5

but it shows important CORRECT structure of that season: there were two "Division 2"s,
and winners of both - POR and NED -- should

* IT table is same as of ES, ie unbalanced, and
list of games ends in FANTASTIC 'Forfait Tunisia 6 – 0 Unione Sovietica '

But why SOV proper, and NOT another team?

* or NED forego promotion to Elite for some reason
and as SPN and TUN were both relegated as per rules,
it was decided to stage a barrage to fill void created by NED refusal

* or it was a combination of both

I'll continue investigation, and if somebody helps, would be very grateful

If you want to try, in this page they are publishing some Tunisian rugby club photos from the 70s and 80s.
Maybe the "owner" of the page remembers that game in Kiev

All Blacks vs All Ceylon (Sri Lanka)

PS: maybe you already wrote it: was that All Ceylon team composed just by british expats or were there also some local players?
Top

PS: maybe you already wrote it: was that All Ceylon team composed just by british expats or were there also some local players?