A thread to collect the possible, rare news coming from this area. The expression "Central Asia" usually defines a group of five nations, all with the same suffix: Kazakhstan, Uzbekistan, Kyrgyzstan, Turkmenistan and Tajikistan. More or less 67 millions people. Rugby is quite unknown over there: Kazakhstan, by far the richest of these nations, has relatively good results, but in Uzbekistan and Kyrgyzstan rugby is definitively a minor sport and in the other two nations it appears to be inexistent or so.

A map, and an old uzbek painting (1547, perhaps) that I like to put here pretending that he refigures a meeting of the five nations
Both copied from wikipedia…

A brief resume of the five nations's data. I had never heard before the name of the Turkmenistan's capitol city
Kazakhstan was twice runner-up in Asian 5 Nations; their women's team qualified for the World Cup in the last six editions.
Kyrgyzstan is still World Rugby associated member, since 2004; their national team played in june 2009 against Mongolia the first men's test match ever with a women (Gabriel Wing Lee) as referee.
Uzbekistan has a good international activity playing sometime in men's XV, in men's 7s and in women 7s events
https://blog.rugby.it
Top

There was a national Rugby Union set up in Tajikistan in 2012, I have no idea what success or progress if any has been made since.

Obviously our Union has links to the region.

Russia's leading try scorer (until Vas gets another, anyway) is Uzbek rugby's most famous son - Vyacheslav Grachev. From Gagarin in central Uzbekistan, he was the last player to be capped by Russia to have played in the Soviet league (for Star, Tashkent). Our second highest points scorer - Kostya Rachkov also originally hails from the region - Almaty, Kazakhstan. And of course there is Horse himself, try-scoring machine Anton Rudoi.

(And on that note, did anything more ever come to light on the curious case of everyone's favourite Union-switching points machine Maxim Lifontov?)
Top

An interesting rugger.info interview about Central Asia, published two months and an half ago

From Kabul to Karaganda

Does life exist in Space? Is rugby cultivated in Turkmenistan? Is it true that Afghanistan hosts a domestic championship? In search of answers to these and other questions, Rugger.info turned to Anatoly Shirov, the official representative of Asia Rugby in the Central Asian region.

Anatoly, let's start non-trivially - do you think there is life on Mars?
- I believe that there is no life there, but they definitely play rugby ... Not on the red planet, of course ... I once saw a team of military veterans from the United States with that name at a Sydney festival.

So these are the Americans. I would not be surprised if, say, there are more players in the US Army garrisons than local rugby players.
- It may be so, but I have the opposite opinion on the basis that the Afghans have been systematically developing rugby in schools over the past two years, and the men's team regularly plays in the Asian rugby 7 championships. There are 18 adult "seven" teams and four "classic" teams in the country. So, you see, Uncle Sam's military units are unlikely to compete in mass scale with the local federation.

They were so surprised. I would never have thought that school rugby is being developed in a country at war. Who else is progressing in this regard?
- Colleagues from Bishkek: for two years now they have been within the GIR (Get Into Rugby) program, regularly hold festivals and plan to create a school league. Moreover, last year the open Central Asian tournament of youth teams in rugby-7 was held in the Kyrgyz capital, with the participation of the men's and women's teams of Kazakhstan, Uzbekistan, Kyrgyzstan, as well as the women's team from the UAE. At the end of June of the current season, Asia Rugby entrusted Bishkek to host the Asian Rugby-15 Championship among men's teams of the third division, but the tournament was canceled due to the coronavirus. There are three rugby-15 teams and eight “sevens” teams in Kyrgyzstan. At the end of the Kyrgyz topic, I would like to note that I feel a certain optimism in terms of the development of women's rugby, despite the fact that there is only one team there.

In contrast to the leaders of the region of Kazakhstan and Uzbekistan, where women have achieved greater results than men.
- And there is. Your statement is true both for the national teams of both countries in rugby-7, and for the women's national team of Kazakhstan in the "classics", which played at the World Cup.

Good. Let's go further. Uzbekistan was covered in some detail in the material “The Star of Uzbek Rugby”, so I ask you about what is happening in Kazakhstan?
- In my opinion, the country has good potential to turn into a great Asian rugby power. For this, the Kazakhs have everything: Traditions. Continuity. Opportunities. A wish. It remains to debug business processes and find financing. At the same time, I believe that this country deserves a separate large material, because it is extremely difficult to cover Kazakh rugby in the framework of a regional review.

Perhaps I agree with you ... And in the near future I will turn to the topic of Kazakh rugby. So ... what have we overlooked? Oh yes ... Tajikistan ... Anatoly, how are things in the Pamir mountains?
- Despite the fact that the federation in this country legally took place, the results of its work, unfortunately, are not visible. As you can not see rugby in Turkmenistan, which we also did not talk about: alas, in this country the prospects are not visible, as there is no national federation.

What are the prospects for rugby-15 in the region? Because it is obvious that in Central Asia they play for the most part the "seven".
- The emphasis on rugby 7 is made for objective reasons - it is an Olympic sport, therefore, it has support from state budgets. Plus - the costs of maintaining teams are many times lower than in the classics. At the same time, it is impossible to say that affairs with rugby 15 are absolutely bad in the region. It is for this reason that Asia Rugby plans to organize an international “classic” championship for Central Asian countries, but it is necessary that all federations come to a common opinion and be confident in their capabilities.

And what about the regional "seven" tournaments?
- Such competitions are held, but so far at the level of children's and youth teams. Together with the regional federations, Asia Rugby is developing several projects for the adult Central Asian national teams.

In your opinion, what should be done to give rugby a new impetus for development from Kabul to Karaganda?
- It is necessary to develop a unified action plan and organize well-coordinated joint work of all federations in the region. I am convinced that with this approach, with a high degree of probability, it will be possible to connect to state budgets, because without government support, the active development of rugby in Central Asia is impossible. And, of course, we need systematic work to attract extra-budgetary financial sources, as well as permanent training of management and coaching personnel.

What steps have been taken in this direction?
- In October last year in Kazakhstan, Uzbekistan and Kyrgyzstan, Asia Rugby conducted one-week training courses under the World Rugby program of the first level. In March 2020, second-level courses were planned in Kazakhstan and Uzbekistan, but due to the pandemic, they were postponed to the second half of the year. In Kyrgyzstan, we expect to receive a grant within the framework of the IOC program "Olympic Solidarity". If our application is satisfied, there will be money for additional coaching courses in Rugby-7 of the first and second level.

Anatoly, thank you for the detailed answers. We wish you to realize all your plans.
- And thank you, I am sure that the interest in our region will grow every year.

Karaganda is a city in Kazakhstan, so the article involves the six nations forming the geographical "heart" of Asia 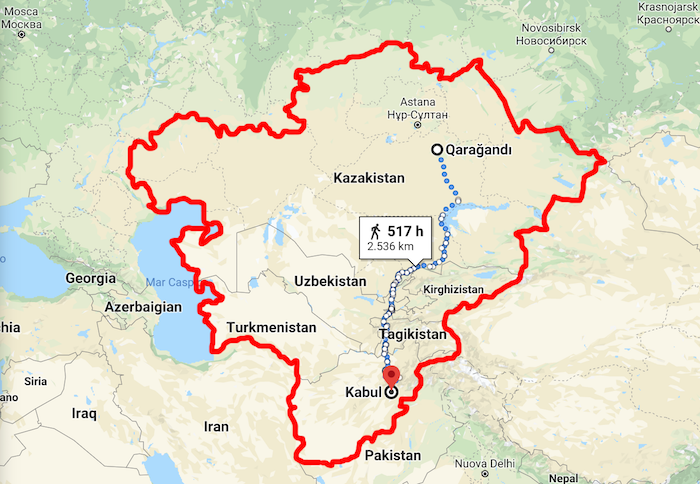