New Shirts for the Swiss XVs released. These are the first under their new Le Coq Sportif deal

I was curious to see the disciplinary decisions about the last controverse episodes but I can't find a proper section in the World Rugby website (as there's no an evident section for the referees' appointments).
Do you know where I can find them?
Through google (not through the website map) I found this page, but it seems not updated since the end of the last RWC
https://www.world.rugby/discipline#Decisions

Is it possible that the website of the main rugby institution in the world has sections hard to be found and an internal search engine that gives you random results, not ordered by date?

PS: found also this "Rugby and the Law" blog, if you don't know it and are interested http://rugbyandthelaw.com

PPS: and I'm still waiting to know why in the women ranking Portugal was sanctioned with a 24 points loss in a sudden, with no explications at all
Top

Well, Portugal hasn't played a test match in 25 years.... it is clearly a defunct team. The question is why others that are inactive for 10 years or more weren't demoted in the ranking as well.
Top

I was told the other day that World Rugby officially doesn't recognise they deduct points from inactive points, just removal of teams:

Q. What happens if a country does not play for a number of years?
Their rating may be deemed to be 'dormant', in which case they will be removed from current ranking lists. However, when they are active again they will pick up their rating from where they left off.

Yet we all know deductions occur while teams are very rarely removed. Portugal Women is the most ludicrous example, but Monaco subsists in rankings as well after a whole decade without men's XV activity. Greece too. They just lose points every now and then.

But don't worry, we are all going to get a laugh when they talk about how transparent they are in next PRs...
Top

And Solomon Islands are still listed as North America, no matter I twitted and told people inside there.

It only suggests they don't care.
Top

My wonder is also why 24 points and why now, 25 years after the last match. Well, my perplexity was also about the fact the we are not even at the end of the year (the moment when usually World Rugby makes its points cuts), but thinking better, yes, the November 23 ranking was in fact the last one of the year for the women, so at least this aspect more or less fits.
It's like as if in the Women Tennis Association ranking they demoted a player from 13th position to 49th position, without giving any explanation and without there's anything about it in the official rules
Last edited by Canalina on Wed, 09 Dec 2020, 21:25, edited 1 time in total.
Top

I've read an article about Groenland and some kids "stolen" by Denmark during the '50s, so I had the desire to see if maybe there's some inuit playing rugby but apparently, judging by the few photos of the Nuuk Rugby Club, there are no inuit between the few players of the team (or maybe one? the girl at the bottom?)
Just a little curiosity

vino_93 wrote:I was a bit jealous about Canalina maps ... so i've done mine

Here is a map of french bred players who played in Top 14 last seasons, showing their first clubs. That's thanks to those clubs they could join regional/big clubs academies, and then become who they are today ... and it's showing you how rugby is split in France.
You can find players who started in New Caledonia, and those from Wallis & Futuna (unfortunately I didn't find their club, but it seems there are only one "official" field per island, so ...).

Unfortunately, I'm missing a few guys. Some are young guys (Zarantonello, Treilles, Yameogo, Rolland, Beaudon, Dridi, Cramont, Idjellidaine); but some have more experience (Briatte, Mousset, Duputs, Fourcade, Moïse, Vernet). If any of you have more information on where they started ...

So enjoy ! (you can make a search with a player name too)

So the map is now more complete and more interesting. We can see the traditional south-western zone, even if we can see some empty places. The Landes (between Bordeaux and Mont-de-Marsan) is surprisingly empty. Same for the non costal territorities in the Aude (West of Narbonne) & Pyrénées Orientaux (west of Perpignan), where it's Rugby League traditionnal zone. So we can see the limit of South-West with a clear mark, descending from Creuse (Guéret) / East of Corrèze (Tulle) / Cantal (Aurillac) / Aveyron (Rodez), where Aurillac is alone.

In the south, we can see the evolution of rugby. All the mediterranean cost is well covered, with a high quality especially in Toulon agglo. More than 30 pro players are coming from this place, especially from 3 clubs (US La Seyne, RC Toulon, RC Hyères-Carqueiranne). North of Toulon, South-East Alps are quite empty of rugby players.
Then we can see rugby follow the Rhône valley, and its affluents Saône & Isère. The Rhône Valley has a real border on its west side. The Forez / Pilat mountains acts as this. And so, there's nobody coming from the Saint-Etienne agglo. Saint-Etienne is the biggest place in southern France not providing player, and the most important with Douai-Lens (Northern France).
In fact, Clermont-Ferrand and the Limagne valley looks like a isolated island in center south.

If we move North, we can see rugby develops along the border. Atlantic coast West, and Switzerland / Germany borders East. Rugby is quite developped among the Loire too, with big cities (Orléans, Tours, Angers) providing various players. And of course, Île de France (Paris area) is an excellence place, with many clubs active. Let's notice the really good work in Bobigny & Sarcelles, two poor suburbs of Paris.
Empty spaces remains. In the West, South Normandie, Perche & Maine are still to conquer. In the East, Champagne & South Lorraine are the same. in the North, Northern Picardy & Pas de Calais are empty too.

Where they find better men than at this Forum?

Canalina wrote:This is an appropriate news for this thread: rugby has been admitted in the Small States Games, played in Europe every two years.
The oval ball will debut in the Games program during the 2023 edition to be hosted by Malta

The 2021 edition has been cancelled (no rugby anyway).

In 2023 Andorra, Cyprus, Iceland, Liechtenstein, Luxembourg, Malta, Monaco, Montenegro, San Marino are eligible to compete in this - all have played sevens in European competition, with Luxembourg and Cyprus seemingly the best 2.

Vatican City has also been given membership, due to a deal signed with the Italian Olympic Committee - any chance they could form a rugby 7s team?

Also, Faroe Islands was denied membership as they don't have an Olympic Committee. Not sure there is any rugby in the Faroe Islands, but the Small States Games would be the ideal place for the Faroe Islands to compete if they wished to start. Pity about this silly rule.
http://theroonba.com Results, fixtures, rankings
Top

At least the Faroe Islands participate in the Island Games.

Btw, with so many British teams, the Island Games should have rugby sevens... any rumours?
Top

The Brazilian Touch has a new nickname: Caramelos. It was elected by an Instagram poll. What is "Caramelo"? It is basically the most common stray dog in Brazil. Real (the Brazilian currency) has animals in its notes and "caramelos" went viral in social media with people claiming the new 200 reais note should have a caramelo dog

. In the end, the government chose the Maned Wolf. But the Central Bank even did an ad with the caramelo staring it: 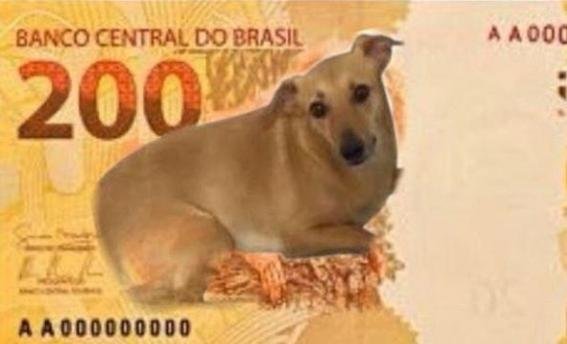 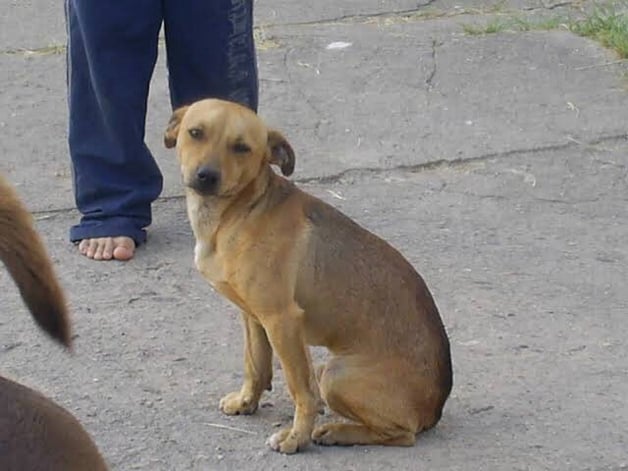 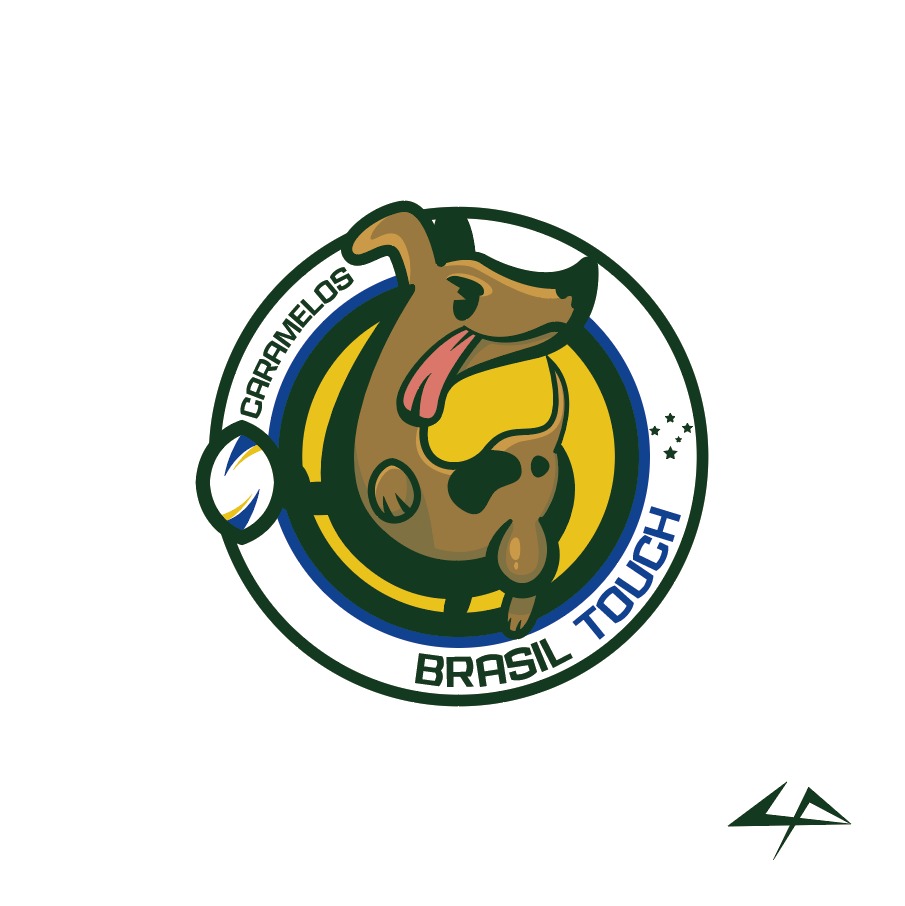 EUSA 2021 (European University Games) still going ahead, they are fixed to July in Belgrade. The schedule is a bit out of focus but the rugby days seem July 24, 25, 26

Wearing partners of the main national teams, according to a quick search on the web. The ones in green are italian. In the third column there are apparent minor partners 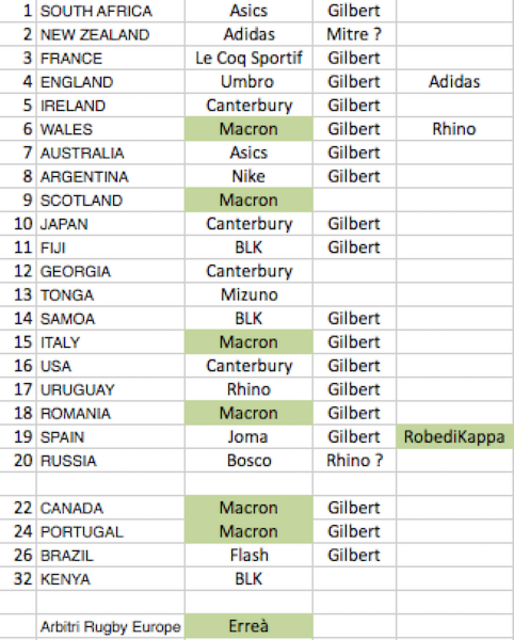 Brazil will soon release a new shirt, own production, not Flash anymore.
Top

And Mitre as ball sponsor for New Zealand is a mistake; I thought the Mitre Cup was sponsored by Mitre balls but I've learned now that the real name of the main sponsor is "Mitre 10", a chain of do-it-yourself stores.
The official All Blacks balls shouls be realized directly by Adidas
Top

I think I saw somewhere that Chile has a new partnership with UMBRO too, not just their SLAR franchise but the National team as well.
Germany may still be wearing Macron, but I'm not sure if the contract is up to date.

The last time we saw them, Netherlands had Canterbury and Belgium, Gilbert, we'll have to wait a few weeks to see if they are still tied to the same technical sponsors.
Top

Btw, with so many British teams, the Island Games should have rugby sevens... any rumours?

I think there are 20 sports - team sports are football, basketball and volleyball. From this list, a maximum of 14 can be chosen. I think the 3 existing team sports are more "international" than rugby union, and so more appealing for an organisation whose members are essentially either British or European. Also, they require only one indoor arena, which most hosting islands already have. For these reasons also, cricket is not included. Not sure what the procedure is to have new sports voted on to the schedule.
http://theroonba.com Results, fixtures, rankings
Top

Rugby Sevens could be played in a football pitch. But I get your point.
Top

Postponing is hitting also the "others" rugby

The Underwater Rugby Euro Championship, to be played in Stavanger (Nor) in june, is postponed to 2022
https://www.facebook.com/eurouwr21

The World Junior Touch Championship, to be played in Manchester (Eng) this summer, was firstly postponed to 2022 and now, I think to have understood, to an undefined period around 2023
https://www.internationaltouch.org/news ... cup-again/

Rugby League has almost no test matches fixed in the next months (just an England men's one and an England women's one) and they've the World Cup in october
https://www.intrl.sport/fixtures-results/

Same for Wheelchair Rugby, which has the ParaOlympic tournament at the end of August
https://www.iwrf.com/?page=home#&panel1-3
Top