I'm boringly stubborn so I signaled to Rugby Europe the "bug" in their upcoming games pages and they kindly answered
"Hi there, we have reported the problem to the web developers who are trying to fix this as we speak. Thanks!"

The error response is still there but they were kind to answer immediately.
I'd like to see if there are italian referees in the last five games (the Poland v Ukraine one will be directed by a russian trio), but there's also the chance that they've still not appointed them
Top

According to some posts emerged on the social media, Marija Shakuro, captain of the Belarus women national team (7s, beach, snow), was arrested three or four days ago in Minsk. The cause? Or because she was taking part to a protest rally or, according to other details, just because she subscribed a petition asking for Lukashenko's resignation, for new elections and for the end of the police repression

Yep, they do this but don't check the world map to see where countries are...
Top

The St.Pauli club, german football Bundesliga 2, painted this murale for Mariya Shakuro, the belarusian woman rugby player condemned to 10 days of prison apparently just because she took part to an unauthorized (and pacific) protesting rally.
According to a source in belarusian rugby, it's obvious that the exit of the elections (80% to Lukashenko, 10% to the main opponent) was a giant fraud. He thinks that Lukashenko should have not had more than 20% of the votes.
As far as I perceived reading some few articles and posts, a big part of the "civil society", many calm and polite and informed people, is backing the protests; also this makes that 80% to Lukashenko appearing very unlikely Even more perplexed in front of the new WR social media approach. It seems they gave the account key to a teenager convinced to be very funny 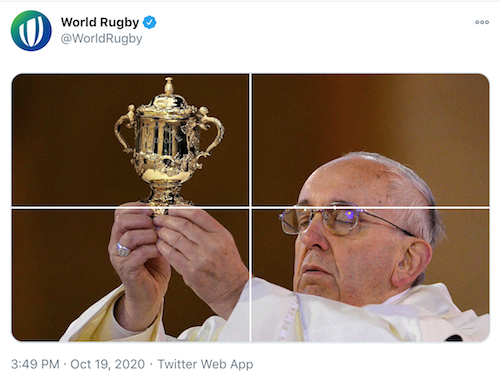 If they are trying to connect with young fans, well, they are not.
Top

They canceled it
Top

Canalina wrote:Even more perplexed in front of the new WR social media approach. It seems they gave the account key to a teenager convinced to be very funny

As a catholic I laughed a bit about this (to be fair Pope Francesco has a record of liking rugby), but I agree, that this is not what a World federation should be posting. Their social media managament is a catastrophy and how bad it is shows, by them thinking it is great as they do create more clicks.

I just had a look at the FIFA twitter account. They post a video about "isolation done right" showing two soccer players passing the ball on a tiny island on the Maledives. That's good story-telling (we adapt to the situation, soccer is still fun, soccer is played and loved everywhere).

World Rugby has been struggling at all of those in years, it doesn't focus enough on the global thing and seems hindered massively, that they apparently don't employ multilingual staff who could actually dig out some new stories from everywhere. They don't need anyone speaking 5 languages, but at least another language than English on a higher level to understand the concept and really know how to use those fantastic translation services all around the internet now.

They are doing an okay job around World Cups with qualification and a videos about non-World-Cup-nations, but their follow-up to build something on it is a catastrophy.
How to grow rugby worldwide?
Look at the world ranking in July. Teams ranked 1-10 have to play one team from 11-20 (they don't play in a regular competition) away the next year. 11-20 play 21-30 away and so on. Yes, it really is that simple.
Top

My browser auto translates (google chrome), you don't even need to speak a foreign language to pick up stories! If they had any kind of reporting structure they could also have them funnelled direct to them via unions.
Top

I do wonder sometimes what are they thinking. they should be provide feeds like the ones below : 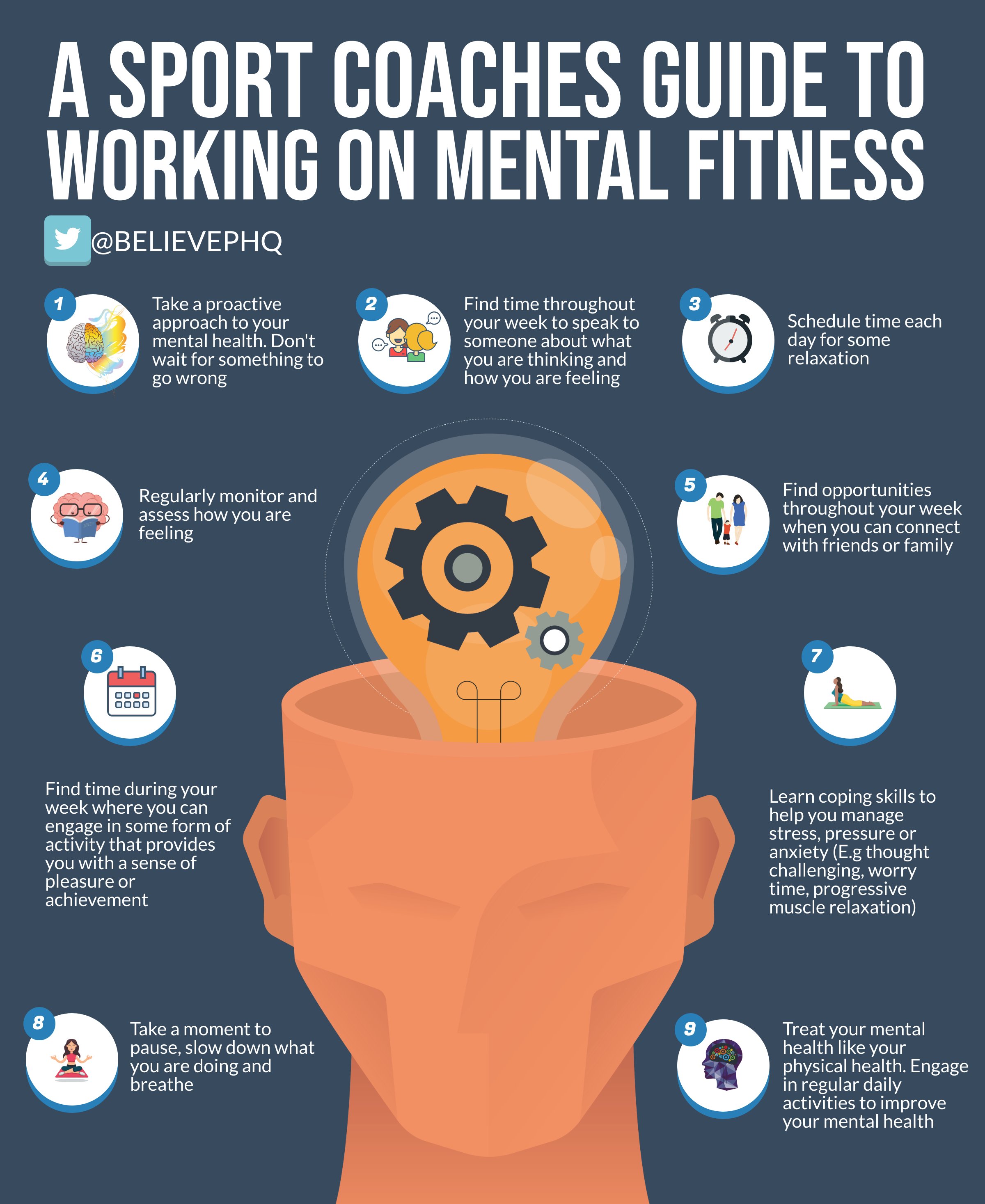 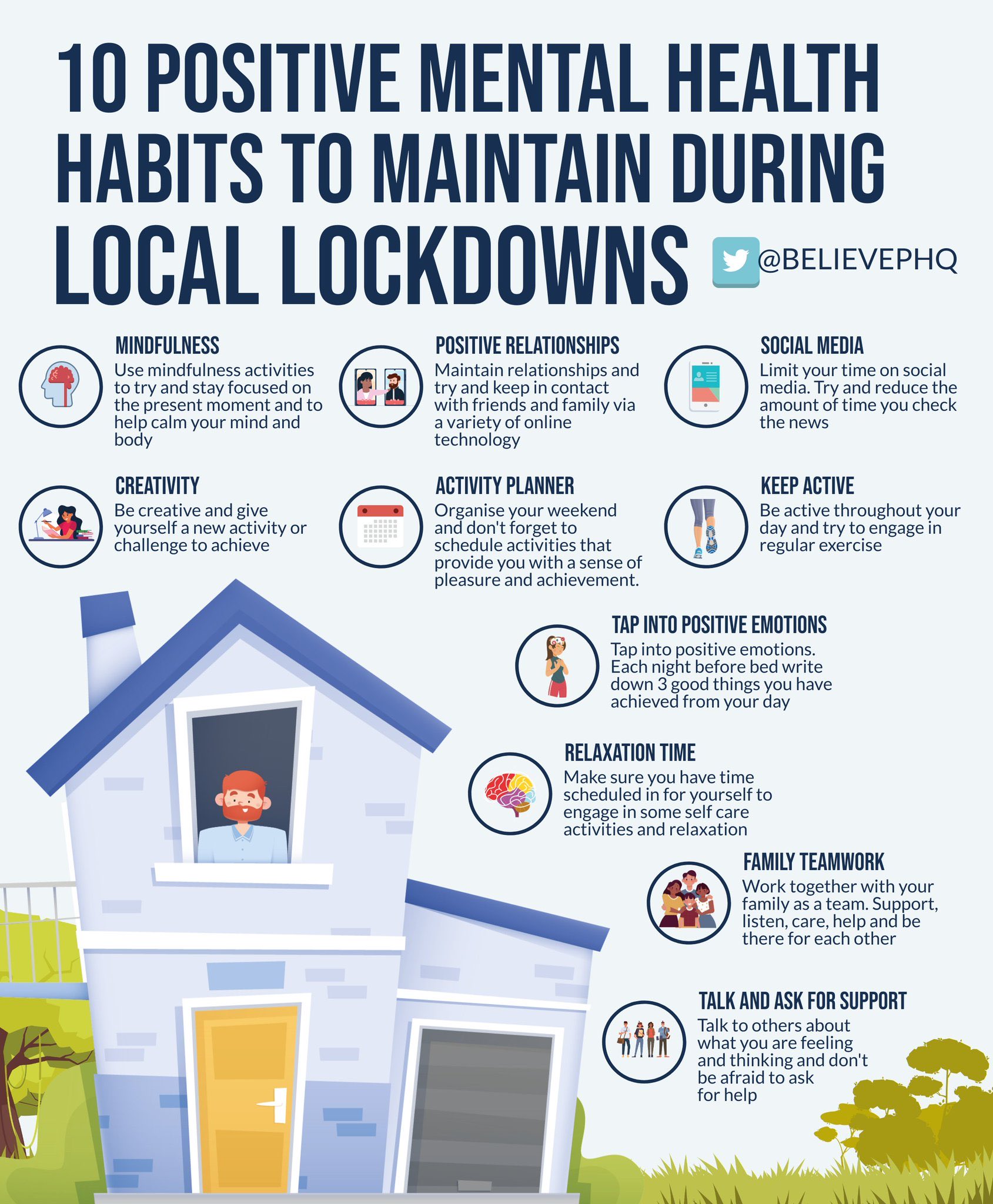 The match was not warming the hearts, judging by the few rumor it created in the past weeks and days, but the behavior of those players is very condemnable, also considering that the game was going to be televised and this will be a not small economic loss for the english federation
Top

WHO those players were?
WHY they keep this in secret?
HOW will be they punished?

A long interview to Mariya Shakuro, after her release. She was not mistreated in jail, apart some little form of prevarication, and they (the police) restituted her the phone that they had sequestered even if she refused to give them the code to unblock it, so at least they are not so terrible. The girls were generally untouched but as far as she saw in the police vans many arrested men were bleeding. She says that when arrested she was not even taking part to the rally but just watching it from the side of the street and she says that her electoral compound was one of the many the results of which have not been made public: according to the testifies appeared on line, the few local electoral results published gave the majority to Tikhanovskaya but most of the local results weren't made public and then the total, like for magician, gave an 80.1% victory to Lukashenko. This morning, I've read, the first industries strikes happened
Top

Better promo idea than the one with Pope Francesco. Well, to my taste at least 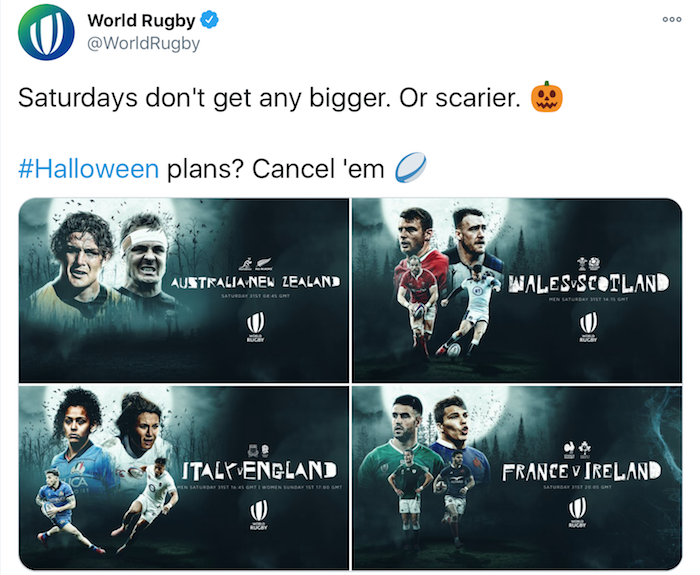 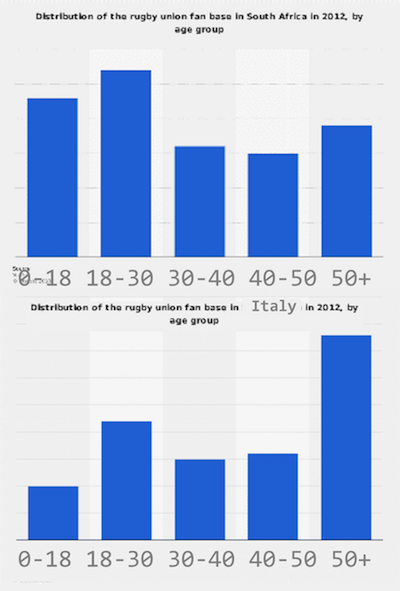 Quite fortunately in italy there are a strong group of 18-30 which like rugby.
Top

Can we say the 18-30 people are those that were grew up in the early years and best years of Italy in the 6N? This means the fall happened because of systematic defeats since it? But it is also interestig that the core of fans became fans much before the 6N.
Top

I bring you a well needed source of laughs. Nielsen report on the growth of rugby, including magical figures like 25% of Brazilians or 23% of Indians declaring themselves as rugby fans:
https://resources.world.rugby/worldrugb ... 19-EN-.pdf
Top

I don't know why they over egg the pudding with their definition of fan, when the real results (25% of Brazilians said they were *interested* in rugby union) are far more plausible and still very good I think. I wonder what the Portugese words they used for "a little interested" and "interested" were too, as I'd imagine these could have a pretty material affect on what box people get put in.
Top

sk 88 wrote:I don't know why they over egg the pudding with their definition of fan, when the real results (25% of Brazilians said they were *interested* in rugby union) are far more plausible and still very good I think. I wonder what the Portugese words they used for "a little interested" and "interested" were too, as I'd imagine these could have a pretty material affect on what box people get put in.

Actually not. The report claims 41% declared an interest and 25% say they are fans

They also claim interest in rugby has doubled since 2013 in eight emerging markets... including Spain, Russia and South Korea who weren't even studied by Nielsen in this year's report! (see Methodology)
Top

Users browsing this forum: No registered users and 13 guests