And I did not write to you, but to our comrade from England. Do not forget that this is not your personal forum. This is a democratic forum. There are different points of view.
Top

Comrade from England? You just insulted his queen! And he respects her and is ready to kneel for her!

I admit that ordinary English people may not be aware of the scale of the genocides that the royal family has been doing all over the world over the past 500 years. When I say Anglo-Saxons. I mean their elite. Which rules for many centuries. This is 1% of the population of England. Those who graduated from Eaton, Oxford, Cambridge and other similar institutions.
Top

We hold out hope that the British Muslims give up their religion or change it into something benign.
Top

Chester-Donnelly wrote:We hold out hope that the British Muslims give up their religion or change it into something benign.

Okay . Perhaps in British it will turn out better.

STMKY wrote:I admit that ordinary English people may not be aware of the scale of the genocides that the royal family has been doing all over the world over the past 500 years. When I say Anglo-Saxons. I mean their elite. Which rules for many centuries. This is 1% of the population of England. Those who graduated from Eaton, Oxford, Cambridge and other similar institutions.

Those leaders are a Normans, Anglo-Saxons and Germans. Compared to most ruling classes they don't treat us too badly which is why we haven't had any revolutions and they still rule over us.
Top

Chester-Donnelly wrote:We hold out hope that the British Muslims give up their religion or change it into something benign.

Okay . Perhaps in British it will turn out better.

The British Muslims I know are cool. But I have also had friends blown up by a suicide bomber, so obviously there are problems.
Top

After 40 minutes a military parade will begin in Moscow.

I also cannot get on with the rugby people on Reddit. They are a woke mob. We are from the same country but a different generation. We might as well be from different eras. They don't think people should have different opinions or find different things funny. They are regularly offended.
Last edited by Chester-Donnelly on Thu, 25 Jun 2020, 22:59, edited 1 time in total.
Top

Tobar wrote:Someone just asked this on Reddit, does one of our Russian friends want to answer them? Or just share the answer and we can tell them.

You can copy my answer to them. I myself can’t write to reddit. I was banned by the LGBT lobby for writing a good Russian opinion on Israel Folau. Tell them to come to our forum. There is no censorship or gay lobby.

I kinda regret engaging in this conversation now
Top

They won't like it on here. Free speech is too violent for western millennials.
Top

Yeah I really regret it
Top

Want to see why the reddit blocked me? When everyone wrote nasty things about Folau there, I decided to translate the opinions of Russian fans into English. Wrote this text here. Reddit is a liberal Nazi dump.

Hello everyone from Russia! I decided to analyze the articles about Israel Folau in Russian sport media and social networks. I translated them for you. Most of the comments were written by Russian fans, but there are also comments from Georgians fans who also speak Russian. I used comments from rugger.info, sports.ru and social network vk.com

Andrei Karpov "They absolutely went crazy. They [on West] themselves write about equality and unity, and immediately spread rot to a person for his statements."

Steel Zucchini "Does it mean?:

a) Australian Rugby Union recognizes the existence of hell

b) they are worried about the future of gays, but they do not care about drunkards and others"

Jugovic "He simply quoted the message of the apostle Paul. Why was he fined? After all, those people who will fine him will surely consider themselves Catholics or Protestants for the most part. Hence, a priori, they must agree with what is written in the Holy Scripture and, moreover, follow it."

Frank "And there are normal people there. Bro hold on!"

Sergei Karasev "Australians with this approach will be hard to develop rugby. If they will force zealous believers like Tongans and Fijians to sodomy."

Nadezhda Lavrinenko "They are completely crazy there."

Zurab Gotsididze "Cynicism - Christchurch Heroes LGBTI + Sports Trust. Tomorrow they will demand that Jesus Christ be kicked out. Although what tomorrow ... The world is going there, unfortunately. Dictatorship."

Gurich "90% of all world rugby players are on the side of Folau, but they just keep silent. Quiet support. Our Union needs to declare its support. Invite Folau to play in Russia. "

Lyapsus Trubetskoy "Is this community [LGBT] valuable for sports? Folau has the full right to his personal opinion and it’s not up to them to decide whether he deserves to play rugby or not."

Boston Jets "Israel went against the system. Dirty, foul-smelling, disgusting and immoral system. I wonder if he will have followers in the West? And when the contract is broken before the World Cup or after?"

Kir Fakir "I bet that many [on West] support Izzy and Vunipola, but they are afraid of falling into disgrace and being criticized, so they are silent."

Levan Mikeladze "Then they should drive half of the Polynesians out of the leading clubs, from the national teams [England, France, Australia, New Zealand..] and rugby will become more fair."

Ildar Ismagilov "They shoot themselves in the leg. Australia's ceiling at the World Cup is the exit to the quarter-finals."

Boston Jets "The more players side with Folau, the better it will be. All are not be expelled."

Gurich "[on West] All afraid to openly take his side. Saracens fans are already demanding to kick out Vunipola from the club."

Susi Ganeshan "And why alcoholics, drug addicts, adulterers and others who are waiting for hell are not so excited?"

Maki Maki "I always knew that he was a healthy person. It has long seemed to me that rugby [on West] turned off the right road when I saw an ad on the LGBT community on Twickenham. Very upset. Well done Man, do not bend, defends their views !!!"

Sergei Revyakin "This is similar to the genocide of normal people."

After as Folau declared that he would not give up his words.

Flyback "I respect him, a worthy man."

Nodari "Rugby is a male lifestyle. All rugby players are required to support the Folau."

Mister Crabs "Well done Israel. Everyone chooses what is important for him in life. I express him great respect and support!"

Rasul Sharipov "Man! God created man and woman for each other and no rear-wheel drive [Russian slang] can change the laws of God."

Gurich "He did not give up! Izzy, Welcome to Russia!"

Sergei Karasev "Well done Izzy. Be yourself, do not bend under this world."
Top

To put own ass in anthil there must be a special talent!

They don't like free speech in the west. Can't promote all sort of evil and irrational policies when the truth is allowed to be spoken.
Top

In 2 division there are also South African.
For example in Dynamo Moscow coach Lodi van Staden and players brothers Keanu and Quade Langeveld ...

There are 2 coaches from Australia and 3 players with foreign names in Narvskaya zastava. Site does not say where they came from.

Britain is not a tolerant place. The man who organised the "White Lives Matter" banner has lost his job.

His stunt was pulled in response to Premier League football teams replacing the player names on the shirts with Black Lives Matter and forcing them to kneel. Everyone was forced to kneel, including match officials. No one stood up to this tyranny. Soccer players are cowards and have too much to lose. To be fair most people are cowards but most people wouldn't kneel, they just won't speak out because this is what happens.
Top

Great Roy Jones Jr. at parade in Moscow!
He is a citizen of Russia and my favorite boxer. 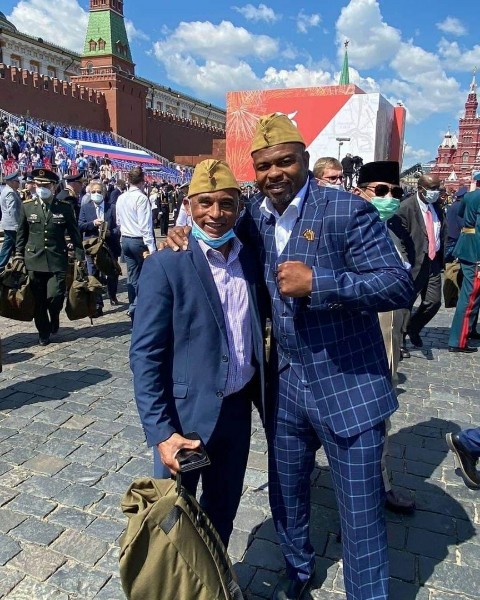 I also love late Johnny Tapia. This is a completely crazy person.

This is part of a global plan. From simple white Anglo-Saxons, French, Germans ... make LGBT people tolerant. At the same time, millions of migrants from Africa and Asia are imported. Which have traditional values. Think about what will happen in such countries in 50 years? These will be completely different countries in ethnic, cultural, religious and even linguistic terms. This is a substitution of the indigenous population. Germany can catch the outgoing train of a large alliance with Russia. But France and Britain seem to have nothing to save. Individual people will run away from there. But overall there will be a disaster.
Top
Post a reply
162 posts • Page 3 of 7 • 1, 2, 3, 4, 5, 6, 7

Users browsing this forum: No registered users and 5 guests