Russia has attacked the HQ of Faylaq al-Sham, Turkey's favorite armed group in Idlib, and the leading faction of the NLF of the SNA.

Faylaq al-Sham is also present in the Astana process and the constitutional committee.

Claims that up to 50 Faylaq members died in the attack.

After the recent airstrike on the Jarablus oil refinery, this strike is just another demonstration of the growing rift between Russia and Turkey.

It seems that many in Moscow are angry about the humiliation of the Russian defense industry by Turkey.

Turks really think that by destroying old Soviet and Russian weapons from armies of developing countries from drones(which consist of 90% Western components) they will be able to challenge Russian army.

Funny thing is that Turks and their military are sure of this.

Besides there are rumors that a new "Krasukha-4" of the Russian army is in Nagorno-Karabakh.
Therefore Turks now have big problems with drones.

Scientists from Russia found out about this 10 years ago.

The LCROSS impact site inside the Cabeus crater demonstrates the highest hydrogen concentration in the lunar south polar region, corresponding to an estimated content of 0.5 to 4.0% water ice by weight, depending on the thickness of any overlying dry regolith layer. The distribution of hydrogen across the region is consistent with buried water ice from cometary impacts, hydrogen implantation from the solar wind, and/or other as yet unknown sources.

Well, finally! Most severe censorship. I hope that their thrown out of Russian Inet.
They can do whatever they want at home but in Russia there is freedom of speech and Western censorship is unacceptable in our country.

Probably in NZ people are so dull that they believe that Russians are interfering in their elections.
But this shitty artist knows hes lying. Whore will simply work out her residence permit and her fee.

This is son of famous Soviet actor Igor Ledogorov. This is probably his best role in life.
Father and son in a Soviet film.

In meantime from Russian are trying to do Jews a century ago we make missiles.
West will not succeed in another holocaust this time.


Anti-missile "Nudol". Detects targets size of a basketball at a range of up to 6 000 km from stationary radar. Rocket was able to hit target at a distance of 3000 km and covered this distance in just 17 minutes.

Can shoot down satellites in space.

10 Ways to Call Something Russian Disinformation Without Evidence
The principles of American Newspeak, vol. 1

I was indignant at destruction of education in Russian in Ukraine.
And yesterday i learned that Ministry of Education of Ukraine is funded by European Union.


This is true price of European values.

With an education in Russian can work all over world. With education in Ukrainian can wash toilets in Europe.
This is an ethnocide of Russians in Ukraine funded by European Union.

Really nice tracker for the US Presidential Election
Top

I still decided to interfere in American elections!
Biden ran a great campaign,

but think Trump will win.

I think you can already congratulate us! Our man became the President of the United States for the second time. This is what history means. In the 90s, when Russia was in ruins after the collapse of the USSR, the Americans elected our President twice. Now the boomerang is back.

While US counts votes sent by mail Biden still has a chance to win.
Winner will be determined after a manual vote count.

When Putin interfered in elections there was no such shit!

What can say. US is not a democracy, but an oligarchy.
Whole world sees it. And these elections will greatly undermine authority of US in world.

Whoever wins will be without power, like when we had Theresa May as Prime Minister. There is no worse outcome for a country. The winners are Russia and China.
Top

I would not say. We do not care, we are enemies of US anyway.
Biden just hates us

So cold war is guaranteed for us.

Perhaps with arrival of Biden something will change for China but for us it is unlikely ... 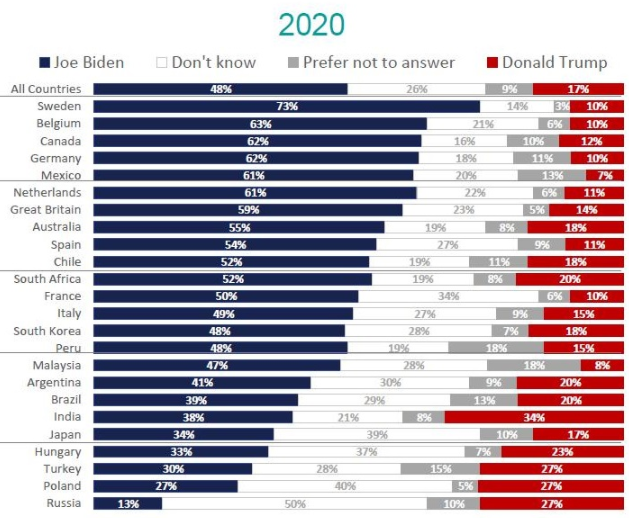