Rugby Europe seems more "aggressive" than the usual on presenting the next two games, with already three dedicated posts on the socials

Samoa v Tonga confirmed for Nov 14 in Auckland, at 14.05 (3.05 AM in Central Europe). That ".05" suggests that the game could be televised.
It will be a three games program: NZ Police v NZ Army (or something like that, I don't recall perfectly) as opener, then Samoa v Tonga and, as closing event, Black Ferns v NZ Barbarians
Top

Not the best choice of time for this bad news. World Rugby just announced the day (Friday Nov 20) and the bands of the World Cup draw, in Auckland

I suppose that the risk to have games decided by the world ranking has become not so tiny, now: the sanitary situation promises to remain critical for the whole winter, in Europe, and if they have to wait april for the Euro Championship, with the Euro qualifiers and the intercontinental repechage still to be played, they risk to go out of time
Top

Some reactions by the russian players to the new postponement

On October 20, it became known that all competitions held under the auspices of Rugby Europe, which were supposed to take place in October and November, have been canceled due to the worsening epidemiological situation in the world associated with the spread of coronavirus.

The match between the women's national teams of Russia and Spain, which was supposed to take place on October 24 in Elche, was also postponed indefinitely. We talked with three players of the Russian women's national team, which managed to hold a two-week training camp in Sochi, to find out their first impressions of the postponement of this important match.

“We were expecting this decision, because there was a certain ambiguity with the match, but during the training camp we put all these thoughts aside,” says Daria Lushina. - This news did not come as a shock, but it was insulting. After all, the rugby-15 national team was strengthened by some of the main players from the seven, so the task was to win, and they themselves wanted to take revenge for the defeat a year ago. But in fact, there was a very high risk that our team would go into quarantine already in Spain, if even one positive test for coronavirus or antibodies was found in someone. And there would be no match, and the whole team would be quarantined. On the other hand, this transfer is a chance for us to prepare even better, because there is a big difference between rugby 7 and rugby 15 and it always takes more time to rebuild.

- The team was preparing, the mood for the game was very good, they were not afraid of an opponent, we are not afraid of anyone at all! - Maria Perestyak confidently declares. - We honestly prepared, but in connection with this situation, we could not show and prove anything to anyone. I am sure that our team would have played well against Spain. Of course, it was a little scary to be stuck in Spain. Rugby is a very contact sport, we do not have any distance, in the game there are constant contacts and contacts between athletes, so such decisions are made.

- The sensations are twofold. The team was preparing, we had a goal for this game. But we understand the whole situation associated with the pandemic around the world, and, most importantly, stay safe, - says Christina Seredina. - The decision to postpone the match is quite adequate, even despite the fact that we prepared well for it, we had a good productive training camp, and an excellent team was assembled. The most important thing is that neither Spain, nor Russia, nor any other country is affected by the pandemic. Isolate sick players and play healthy like in other sports? It seems to me that this can be done in the domestic championship. But when it comes to an international tournament, there is a possibility that you can even catch a disease somewhere in flight or at the airport, especially since it has not yet been fully studied, Athletes are suffering a lot now, the coronavirus is hitting all of us hard, including number of emotions. Let us hope for the best!
Top

Ireland's game against France has been moved to Dublin because Irish players would have to isolate if they travelled.

This would presumably have made their travelling to Spain for the World Cup qualifiers a problem. So even if the Euros had been played it is likely that Qualifiers would have been postponed anyway.
Top

Was Ireland-Italy now part of the RWC Qualy?
Top 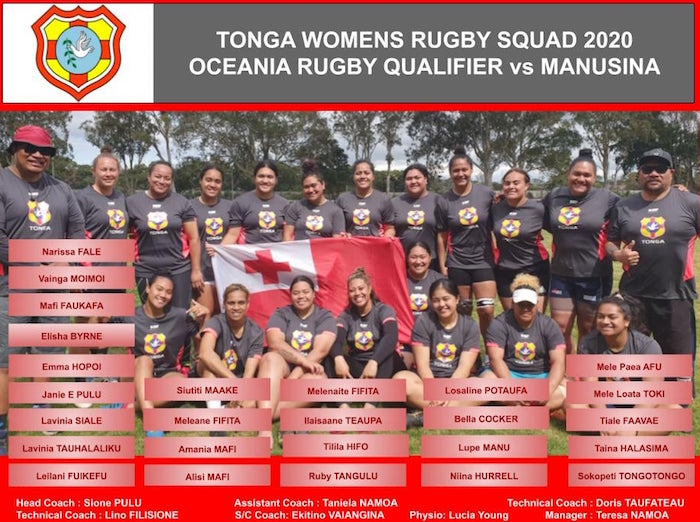 Bad news: according to the good page OnRugby, the european qualifying tournament slipped to an unknown date of 2021.

Samoa v Tonga, this saturday (at 2 AM CET!), will be shown by Sky Sport NZ (Sky Sport Select), so I suppose a free live stream will not be available.
After that game Sky Sport will show Black Ferns v NZ Barbarians, and then the men's Championship match
Top

Really concerned about how they will find dates for the Repechage...
Top

At least this match should be played, possibly the only one of the qualifiers between last march and next march

The Draw is next week, It seems to me a bit premature considering what's happening in the world.

Having said that How many European countries still need qualify based on the below is it Two or one? 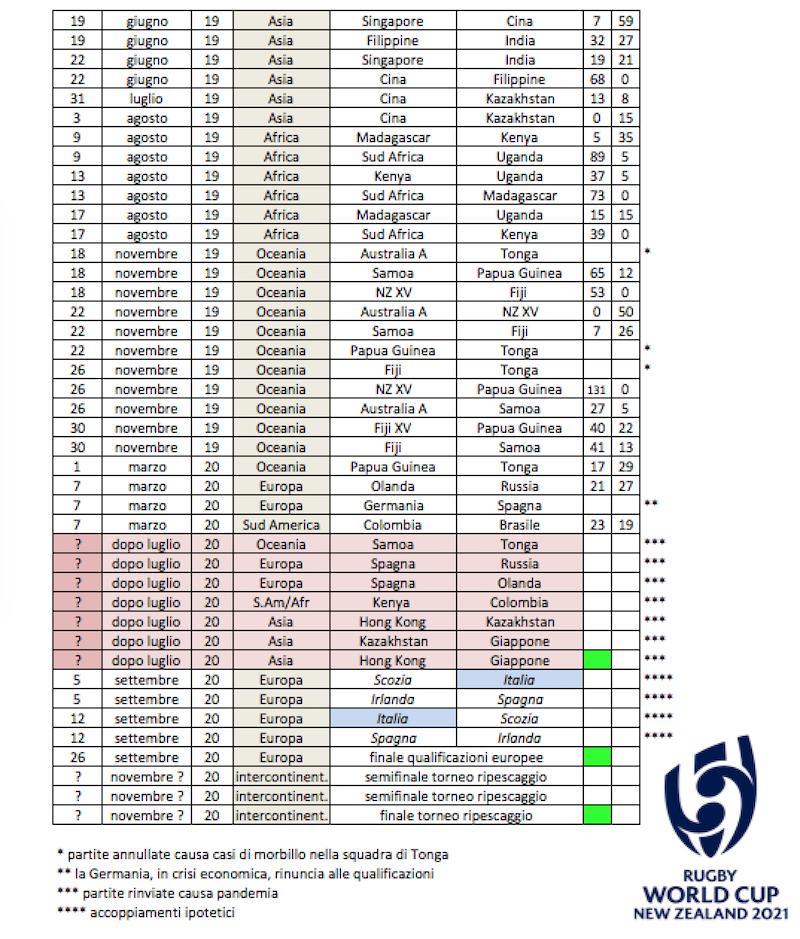 One... and the repechage spot.
Top

What surprises me is that the draw is at 7.30 AM in Auckland; it gives the idea of an Euro-centric world, with local people forced to organize an event when just woke up for the comfort of we europeans...
In Fiji, an other qualified nation, it will be 6.30 AM
Top

Geraldine "Gene" Solia-Gibb, who will wear tomorrow the samoan shirt #5, already played in a World Cup. A netball one. https://www.facebook.com/ManusinaXV narrated that
Top

Samoa v Tonga will be live on https://twitter.com/oceaniarugby , tonight: 2 AM CET, 1 AM GMT

Samoa is the first team to qualify to the repechage final quadrangular, Tonga is out of the World Cup. I've seen just the highlights and the samoans seemed a good team, with some heavy weight but also with a relatively good handling; I think it wouldn't be easy for Italy to defeat them in an eventual repechage game. Also considering that this was just a NZ based samoan team. The reserve prop Luti Sikoloni made a pair of booming tackles and a powerful try

Full game, if they don't cancel it
https://twitter.com/i/broadcasts/1BRJjBzmaELJw
Top

Nice to see Samoa looking competitive. They have a history.
Top

According to this article with the words of italian coach Di Giandomenico, today there's a meeting between World Rugby, Rugby Europe and the nations involved in the qualifiers to try to define some date in the qualifying path