Substitute Wimbledon with "Olympic Games tennis tournament" and you will have players from Bolivia or Pakistan playing once every four years in a top tournament, probably for just two sets. Or think to the Olympic alpine skiing slalom or to the Olympic track&field 100 meters: for some athletes the dream lasts more or less 10 seconds

I don't want to say it's a good format, just it's not an unicum in the sport panorama
Top

Well, in Olympic tennis you see individual players switch to doubles and mixed doubles if they fail in early rounds.
Top

Canalina wrote:Substitute Wimbledon with "Olympic Games tennis tournament" and you will have players from Bolivia or Pakistan playing once every four years in a top tournament, probably for just two sets.

Not true. Apart from the top 56 players in the world ranking (+ the players getting in because a nation has more than 4 players in the top56) there are only 8 wild cards for the Olympic tennis tournament. The lowest one was a player from Barbados, but he had also qualified for a Grand Slam tournament before. His earnings on the tour are at 430k USD now.
https://en.wikipedia.org/wiki/Tennis_at ... lification

So there were only a handful of non-tennis-millionaires playing there.
I understand where you're coming from though.

Canalina wrote:I don't want to say it's a good format, just it's not an unicum in the sport panorama

Every other team sport I can think of has group stages. After 14 minutes you are basically out of the tournament. That is indeed a unicum in the sport panorama in team sports as far as I know.
How to grow rugby worldwide?
Look at the world ranking in July. Teams ranked 1-10 have to play one team from 11-20 (they don't play in a regular competition) away the next year. 11-20 play 21-30 away and so on. Yes, it really is that simple.
Top

Comparing individual sports and team sports is like comparing apples and oranges. They're require two different set of planning, training and competition structure. Knockout team sports do happen, but they usually happen along with some other type of group play. Football in England would be pretty dull if the FA Cup was the only competition.
Top

Canalina wrote:Let's not forget that in Wimbledon or Roland Garros, for example, they always had a knock-out format. Also a tennis player who dreams Wimbledon for a year and trains for it could be out of the tournament just after two sets on a side field. And even without placement matches as consolation.
As you said, the choice of San Francisco format must be not just a matter of time because dropping the placement matches they would have had room for pool games; evidently they really wanted this format, I suppose due to the fear of boring the US crowd with the pool games.
Let's see, maybe we could love or at least accept this format after having tested it

Can we stop accusing Americans of stupidity, this has nothing to do with us. We've held a tour stop for 14 years. We understand pool play from other sports like...oh Basketball at the high school level. This is just WR acting a fool.
MLR Podcast: https://soundcloud.com/earfulofdirt
Top

I was not accusing US crowd of stupidity, just of a different taste on sport viewing.
If my assumption is wrong, sorry; but there was absolutely no offense in it
Top

Our sports viewing is more similar than not. We understand the purpose of pool play. I do wonder if this is now the end of RWC 7s.
MLR Podcast: https://soundcloud.com/earfulofdirt
Top

TheStroBro wrote:Our sports viewing is more similar than not. We understand the purpose of pool play. I do wonder if this is now the end of RWC 7s.

It's purely a logistical issue, considering that this is the re-launch, I doubt that this is the last of the 7s RWCs. I could see the format staying this way should it be considered a success, if not then for the next 7sRWC the host city will need 2 stadiums in walking distance.
Top

The only reason for the knockout format is because they botched up the event location. I still don't know how the hell that happened. The easiest solution is to have the women play on the Thursday and Friday, and the men on Friday evening, Saturday and Sunday. It's not rocket science. If they want to have the men and women play together they have to add a fourth day onto the schedule. There's no way around it, there just isn't enough hours over 3 days to have 40 teams playing at the one location. You're going to be hard pressed to find two stadiums within walking distance of each other. I can easily see players not liking this scheduling at all. One chance, that's it. It's complete nonsense to think this is a fair way to have a world cup.
Top

World Rugby is writing Brazilian womens team name WRONG. They are calling on Twitter and press releases as LAS YARAS. Fuck. "Las" is SPANISH. In Portuguese is is "As Yaras". And i saw also "Yarras", with double R, which is also wrong.

After 2016 it should be pretty clear for everybody we dont speak Spanish.
Top

Late change: Mariana Nicolau out, Milena Mariano (from São José too, with 18 yo) in.

Out of 16 national teams in San Francisco 0 (zero) have a woman coach
https://www.rwcsevens.com/teams/womens

Which could be the explanation? Women trust a man coach more than a woman one? Men's rugby is more evolved and diffused than the women's one so it's logical that there are much more high level coaching men than women?
Top

I don't think it is about the players. It is the Unions that hire the coaches no matter what the players think and the Unions are basically men in most countries.

But it is important to ask how many women in each country are searching for a coaching carreer and how old is local women's rugby. If you don't have many veteran women, former players, the chances to have good women coaches are smaller.
Top

So the only upsets in Round of 16 happened in intra-core team clashes. This format might work with men as there are more programs established for a longer timeframe, but with only 12 teams in Women's Sevens World Series it would have been way wiser to maintain pool stages for women.
Top

Which could be the explanation? Women trust a man coach more than a woman one? Men's rugby is more evolved and diffused than the women's one so it's logical that there are much more high level coaching men than women?

Not sure to be honest, why they stick to men, in the UK there are some highly qualified women coaching premiership teams. Women's Rugby has been around for a long time in the British Isle and also in Australia I have met a few who are Level 3 or above.

Why are they are not at International Level is something that I do wonder.

I feel sorry for Mexico they got England in the elimination round.
Top

What a match for Bianca Silva, 2 tries! She has only 19 years old. And Rafaela Zanelatto (18 yo) entered very well, gave the offload for Amanda Araujo's try. Brazil is terrible defending, but have good momments with the ball in hands.
Top

For you non italians to write our double-consonants seems as hard as for we italians to write the croatian or hungarian names full of Y, J and K (and in italian the first name of the player would be Raffaella!)

Maybe my favorite try of round one
Top

There a lots of Italian surnames in Uruguay, and you can find the "tt", "ll" and "pp" as double or single anywhere.
Top

Italian names are absolutely common in Brazil, with millions of people specially in the South/Southeast with Italian origins. But people with Italian family names here don't speak Italian anymore (apart from tiny isolated communities) as the imigration happened from 1880s-1920s and almost everybody with Italian names is only a % Italian, with many other origins too (I am 25% Italian...). Mix is the rule.

We definitly do mistakes with the double consonants

(and I stuidied Itailian for two years, never know when to double letters

There's no a rule, it's just a matter of habit: for an italian "Zanelatto" doesn't sound like a surname, so I checked and in fact it was Zanellato.
Of course I don't want to criticize (my english is so mediocre that I can't criticize any other's language skills...) but it's funny that "the strangers" can't spot the correct double consonants spelling not even by lucky guess: ask an american to write the name of the great opera singer and he will write "Pavvaroti" or "Pavarroti" or "Pavvarroti" or "Pavaroti". Certainly not Pavarotti...

Back on the games, these are tonight semifinals (KO are in central Europe time); I hope France or USA can break the a-bit-boring oceanian dominion 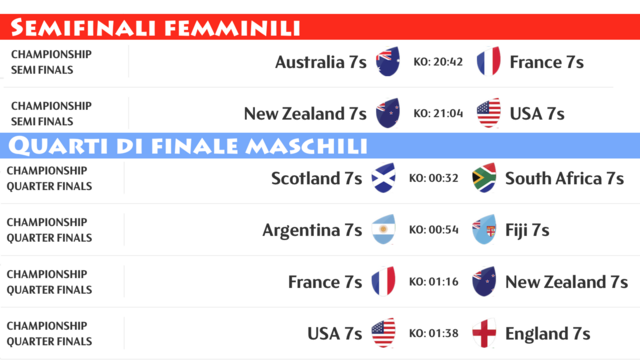 I think "upset" is too strong a word. England have been poor all season. They didn't finish higher than 7th in any of the WSWS legs and ended up with 3 more series points than Ireland - hardly significant. Historically England were one of the trailing bunch, just behind NZ and Aus, but that simply isn't the case any more and I don't know why.

I think China could surprise a few people. They qualified at Hong Kong for next season's series, and I think they will be strong enough to maintain their core status rather than going straight back down. It would not surprise me at all if they give England a tough game and even beat them.
Top

England beat China 38-0 so I suppose I must retract much of my last post.
Top

Again almost empty stands this morning. Maybe this aspect should be considered before the next edition: too long days of play lead to a morning desert on the seats. Of course I know that it's a problem hardly solvable
Top
Post a reply
111 posts • Page 4 of 5 • 1, 2, 3, 4, 5