Does the article mention April and potentially July as dates for qualifiers?

Yes, it does. Why are you surprised? It's on the order of the things, to me. With the epidemic probably hitting the northern hemisphere at least until April, the hypothesis to have to play the European qualifiers in July is not so absurd. It would remain the problem of the repechage tournament and, as the italian coach says, the problem for all the working players to have a busy sport schedule in 2021 and with still many uncertain dates.

To be more precise about today's meeting with World Rugby and Rugby Europe, Di Giandomenico said that it's "an other one" and that "it will certainly be not risolutive". So we can't expect great news already this evening
Top 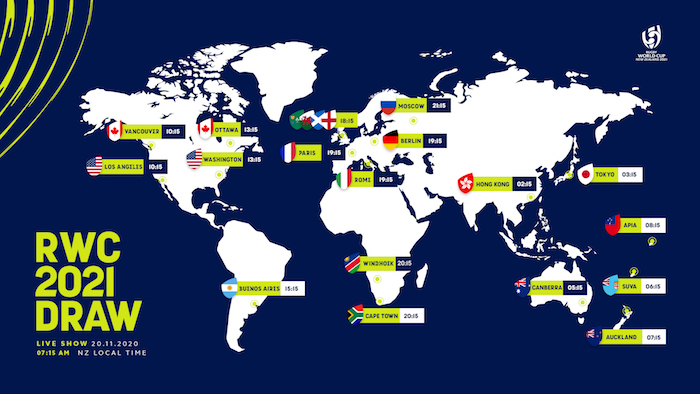 Tomorrow evening (friday morning in Auckland). I hope Italy (if qualified) may avoid England and take the pool with New Zealand. Hard to believe but Italy and NZ never met
Top

Also Samoa start to say that the final repechage tournament risks to be cancelled and that in that case they hope to be picked up for the World Cup anyway
https://www.rnz.co.nz/international/pac ... d-cup-tilt
Top

Really exciting draw. New Zealand in pool A with Australia. USA in pool B with Canada. And England in Pool C with France. These will be huge pool games.

The top 2 of each continent together
Top

In the Spanish site, they update the calendar and without confirming them, they have this

I dont know if it´s next year tournament or the one from this year.
Top

With three games, it seems the Euro 2021. I mean, the new one. Just to make the calendar more busy

Kenya v Colombia will be an equatorial derby. The equator line crosses both the countries

diegodolan wrote:In the Spanish site, they update the calendar and without confirming them, they have this

I dont know if it´s next year tournament or the one from this year.

Has this appeared since the WR/RE meeting on the 17th that the Italian coach was talking about earlier this week?
Top

No, its date is November 16th.
Top

I would be surprised to see them playing also the Euro 2021, apart the remaining Euro 2020 and the World Cup qualifiers

Unless... maybe Euro 2021 is a four teams tournament with Spain, Russia, Netherlands and (Germany or Czech Rep.) and the spanish games vs Russia and Netherlands will count also as qualifiers, together with the Netherlands v Russia game of the 2020 season. A bit intricate, but I think it would have more sense than playing both the Euro 2021 and the rematches of the Euro 2020
Top

The qualifiers in a glance, from wikipedia. Not so immediately clear but anyway nice to see
Grey=already played qualifiers 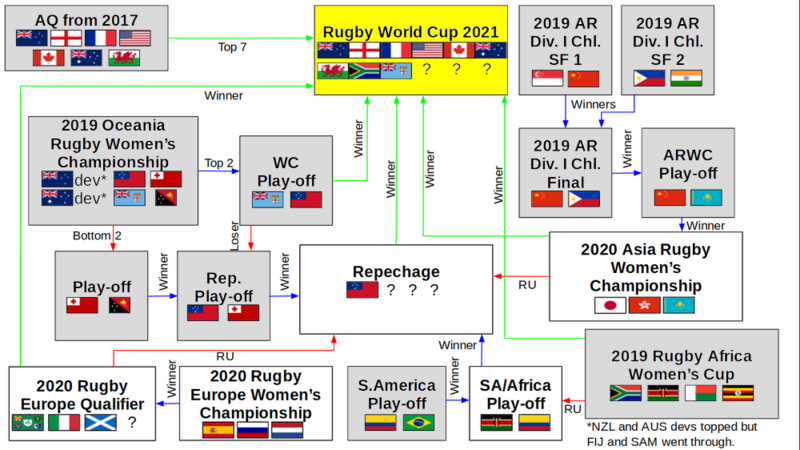 Canalina wrote:The qualifiers in a glance, from wikipedia. Not so immediately clear but anyway nice to see

Lots of qualifying games to played before the tournament.
Thinking Ireland and Japan will direct qualify, Leaving the Repechage for Samoa, kazakhstan, Scotland and (coin toss) and I think Scotland will come out of that group.
Top

Agree about Ireland and Japan and agree about Kazakhstan, but I hope you are wrong about Scotland as Euro qualifiers runner-up. I hope Italy can take that second place, even if our team seems a bit declining while Scotland seems neatly improved in comparison with a pair of seasons ago; and also Spain or Russia could be tough contenders.
I think Italy just returned to the level we deserve, considering the number of our players and clubs; the second place in the Six Nations 2019 and the fifth place in the world ranking were a sort of miracle, almost hard to understand.
A mysterious entity is also France: they're able to almost defeat England in England and to finish third in the World Cup, but they're also able to lost heavily in Italy (2019) and to draw with Scotland
Top

Just an idea, I think maybe, to reduce the number of matches to be played in the rest of the Qualy and to used "bubbles" better, maybe they could do only two tournaments:

And that's it.
Top

According to a list of referees published by Italian Federation, the Euro qualifiers calendar should have been this

Veintidós reports that Ireland will host European RWC qualifiers in a round robin format after Six Nations
https://www.revista22.es/2020/12/world- ... n-irlanda/

I'm sorry but I don't get where this comes from. If rankings were taken, it should be Italy. Moreover if games were played home and away Ireland should have played two away, now it will host all of them. And already hosted in recent times 2016 Olympic qualifiers and 2017 RWC... Isn't that enough? Is World Rugby really rewarding a union whose scarce support for women's rugby has even been criticised by their own people?
Top

because IRFU can cover the costs?
Top

I don't think that should be the main criteria for something in theory as important as a RWC qualifying tournament.
Top

Let's not forget that Spain host two out of two Euro games at home, with Netherlands hosting one and Russia zero.
I mean, it's not always a matter of strong powers but maybe just a matter of practicity and economicity; Spain as host of the RWC qualifiers is off because we still don't know who between you, Russia and Netherlands will play in the qualifiers; Italy could have hosted the qualifiers, maybe in Parma in the rugby citadel where Zebre and the national women team itself usually train, but if the Italian federation was ok with an Irish venue, well, it's ok an Irish venue...

PS: I can't see a mention of a round robin in that link. They specify it in the paper version?
Top

You're right, it talks about play-offs, so maybe we're back to the original format and they have changed seedings to current rankings instead of January ones as it had been expected.